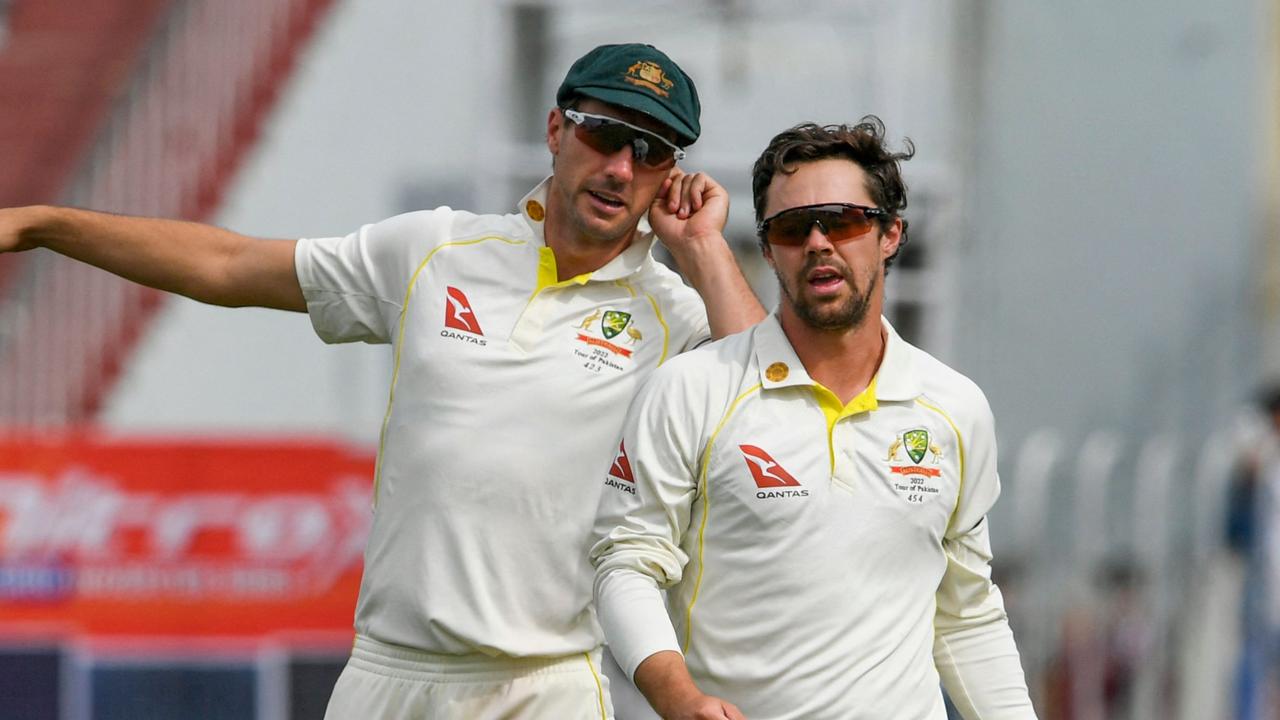 One of the most uninspiring Test matches in living memory has finally drawn to a close, and Australia’s bowlers are a global laughing stock.

One of the most dull and uninspiring Test matches in living memory has finally drawn to a close, with the first Test between Pakistan and Australia at Rawalpindi ending as a draw.

Australia claimed just four wickets, one of which was a run out, during the five-day fixture at Pindi Cricket Stadium as Pakistan finished the Test with an aggregate total of 4/728. That equates to 182 runs per wicket.

In the history of Test cricket, Australia has never conceded more runs while taking less wickets in a match.

Australian vice-captain Steve Smith described the pitch “benign” and “dead” on Monday evening, which was honestly an understatement.

Pakistan openers Imam-ul-Haq Abdullah Shafique combined for an unbeaten 252-run opening partnership on Tuesday, each bringing up momentous centuries. It was Pakistan’s largest opening stand against Australia in Test history.

Imam-ul-Haq became the 10th Pakistani cricketer to score twin Test centuries, compiling a classy 111 not out in the second innings to accompany his 157 in the first innings.

Meanwhile, Shafique brought up his maiden Test century in just his sixth first-class fixture, ending the day unbeaten on 136.

It was just the second occurrence in Test history of two openers scoring unbeaten centuries in the same innings, the other coming back in 1984.

None of Australia’s pacemen bowled after the 35th over with skipper Pat Cummins resting them ahead of the Karachi Test, which gets underway on Saturday.

Even Usman Khawaja was thrown the Kookaburra at the end of the day – it was the first time Australia has used nine or more bowlers in a Test innings since the infamous Kolkata match of 2001.

“The Pakistan bowling attack have completely out bowled them … on the same batting surface they took 10 (wickets),” former Australian batter Simon Katich said on commentary.

“There must be some slight concerns about the way Pakistan was allowed to accumulate runs in the first innings, losing only four wickets, and now in the second innings not even getting one wicket on day five.”

Cricket pundits ruthlessly blasted the Rawalpindi curators for preparing a pitch that offered so little for the bowlers.

The International Cricket Council is expected to come down hard on the curators – under current regulations, a pitch is considered “poor” if it “displays little or no seam movement or turn at any stage in the match together with no significant bounce or carry, thereby depriving the bowlers of a fair contest between bat and ball”.

Cummins told reporters at stumps: “It wasn’t a super fair contest between bat and ball.”

The Aussie skipper conceded a second spinner was “probably the way to go” for the second Test, meaning Mitchell Swepson or Ashton Agar should expect a tap on the shoulder this week.

But the woeful deck should not detract from the significance of this Test match, being Australia’s first on Pakistan soil since 1998 – the year before all-rounder Cameron Green was born.

The Pakistan spectators held up signs thanking Australian cricket for taking the plunge and helping bring Test cricket back to the Asian nation, which did not host any Test cricket for 11 years after the Lahore terror attack of 2009.

“Thank you Team Australia. We will never forget,” one sign read.

For the sake of cricket, let’s just hope the second Test in Karachi isn’t played on an absolute road.

Imam-ul-Haq has potentially been gifted an extra life on 94 after Australia opted not to review a decision that could have seen him back in the sheds.

During the 60th over of Pakistan’s second innings in Rawalpindi, Imam-ul-Haq awkwardly prodded at a delivery from off-spinner Nathan Lyon that smacked into his pad and was caught by Marnus Labuschagne at short leg.

Some Aussie players around the bat appealed, but the on-field umpire shook his head. Skipper Pat Cummins literally laughed off suggestions for a review.

But Snicko replays showed a small spike as the Kookaburra went past the bat, suggesting there may have been an edge.

To rub salt into the wounds, Cummins decided to review a caught behind decision a few minutes later that did not make contact with the bat, wasting one of Australia’s unsuccessful review.

Imam-ul-Haq brought up his second Test century soon after, reaching the milestone in 179 deliveries on Tuesday.

Pakistan opener Abdullah Shafique has brought up his maiden Test century at Pindi Cricket Stadium, reaching the milestone in 183 deliveries on Tuesday.

The right-hander passed triple figures with a glance towards fine leg off Australian all-rounder Cameron Green.

He embraced teammate Imam-ul-Haq before dropping to his knees and praying.

The 22-year-old, playing in just his third Test match, has a bright future ahead of him.

Australia is resorting to come questionable tactics as they hunt for a breakthrough in Rawalpindi.

Off-spinner Nathan Lyon is bowling at Pakistan opener Imam-ul-Haq’s pads with a heavy leg-side, a strategy that paid dividends for the hosts on Monday.

Steve Smith and Cameron Green both fell to deliveries that pitched comfortably outside leg stump, so the Aussies have decided to give it a twirl as well.

The opening partnership between Imam-ul-Haq and Abdullah Shafique has exceeded 150.

Hundred up for Pakistan

Imam-ul-Haq and Abdullah Shafique have combined for a century partnership, their second of the match.

This is the first time Pakistan’s openers have combined for a century partnership in both innings of a Test match against Australia.

It’s also just the second Test in history with three opening partnerships worth more than 100, the other instance taking place at Adelaide Oval in 1947.

As Australia desperately searches for its first wicket of the innings, speedster Mitchell Starc is starting to find some reverse swing.

Starc is shielding the Kookaburra as he steams in, with the ball nipping away slightly from the right-handed batters.

Pakistan’s Imam-ul-Haq and Abdullah Shafique have combined for a fifty-run partnership, reaching the milestone in blistering pace.

The hosts passed fifty when Imam-ul-Haq slapped a mammoth six off Australian off-spinner Nathan Lyon in the 12th over.

Australia all out for 459
Australia’s first innings only continued for 20 minutes into Day 5 as the tail failed to wag.

Pat Cummins, Mitchell Starc and Nathan Lyon were all dismissed in quick succession as Australia was all out for 459, finally bringing the first innings to an end early on the last day of the Test.

Pakistan spinner Nauman Ali finished with 6/107 six wickets, and will be on a hat-trick if he somehow gets another chance to bowl on Day 5.

The first Test between Australia and Pakistan in Pakistan since October 1998 is limping toward a joyless draw as the Rawalpindi pitch has offered absolutely nothing.

Pakistan didn’t have a Test match on home soil for 11 years after a terror attack ended Sri Lanka’s 2009 series and this is just the fourth series back since.

But it’s one of the last things the cricket-starved nation needs.

Four years ago, the MCG was given a “poor” rating, which saw just 24 wickets fall over five days and leading to Australia’s best cricket ground being threatened with a 12-month ban from International cricket. A “poor” rating is worth three demerit points, five points in five years and a ground is banned from hosting international cricket for 12 months.

This match has had 11 wickets fall in four days and unlikely to reach any great heights as the pitch offers very little.

Steve Smith said the pitch was not offering much.

“It’s pretty benign,” Smith told reporters. “There’s not a great deal of pace and bounce in it for the seamers, that’s for sure.

“I think the spinners have offered a little bit. When you’ve hit the right length there’s been a bit of natural variation, and when you get it out a bit wider into the rough there’s a bit there as well.

“But outside of that, I don’t think there’s a great deal on offer for the fast bowlers … It’s a pretty benign, dead wicket.

“There’s not very much bounce, not a great deal of pace and if you’re bowling stump to stump and setting straight fields it’s not overly easy to score … but also probably difficult to get out as well.”

He added: “I just don’t think it’s good for anyone.”

Wickets have fallen at an average of 84.09 runs per wicket, the highest since a 2013 match between Sri Lanka and Bangladesh.

It’s also on track to have the fewest wickets fall in a match this century, as the record stands at 17.

Under current regulations which came into place after the MCG Test, a pitch is “poor” if it “displays little or no seam movement or turn at any stage in the match together with no significant bounce or carry, thereby depriving the bowlers of a fair contest between bat and ball”

The ICC also suggests that “if anything, the balance of the contest between bat and ball in a Test match should slightly favour the bowling team”.