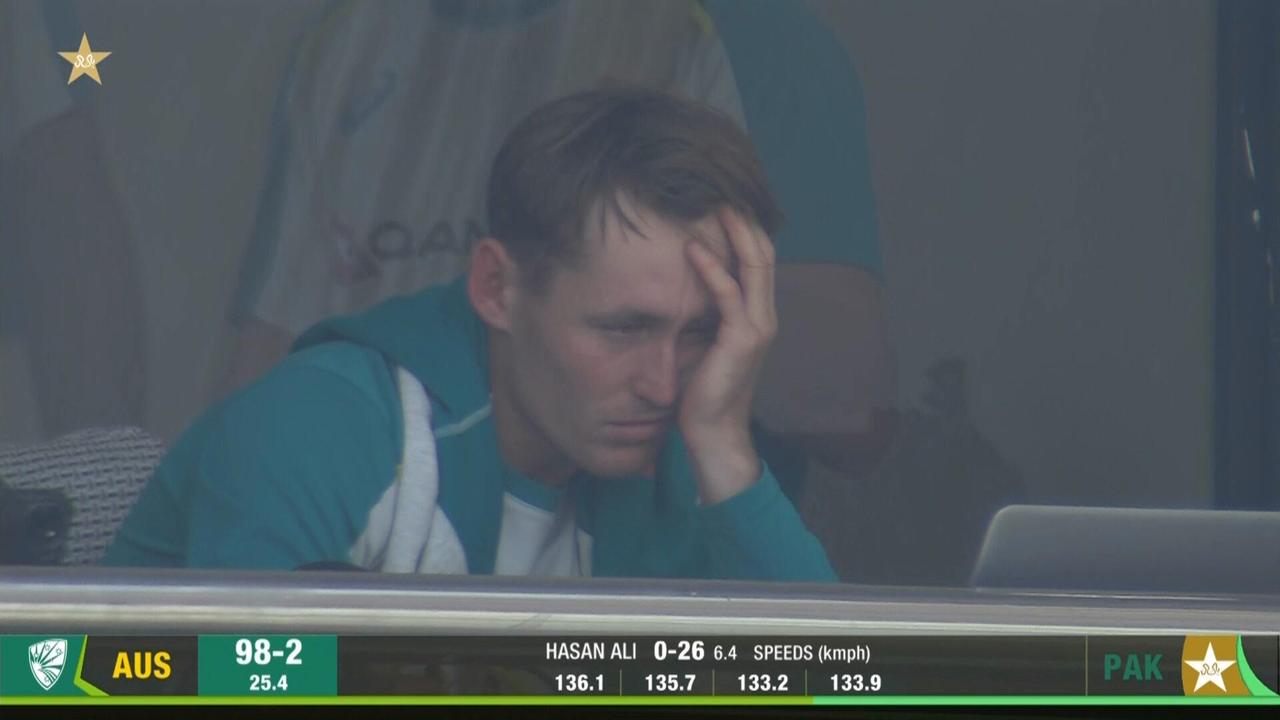 Marnus Labuschagne looked exactly how you would expect a cricketer to act after a massive brain fart in the Second Test.

The second Test between Australia and Pakistan is here and the cricketing world will be hoping for much more than the dour draw from the first Test in Rawalpindi.

Only 14 wickets fell over five days and although there was some time lost to bad light and rain on the fourth day, it was mostly just a slow slog for the bowlers.

Australian captain Pat Cummins confirmed at the toss of the coin his team believes there will be more turn on the Karachi pitch. He also announced Queenslander Mitch Swepson has been handed his first Baggy Green five years after being called into the Australian squad.

Australia reached 2/172 at tea after two wickets wickets fell late in the first session of play.

Usman Khawaja and Steve Smith have steadied the ship for Australia as their third-wicket partnership past the 50-run mark as Australia past 150. Pakistan was one wicket away from having Australia in trouble after the quick dismissals of David Warner and Marnus Labuschagne.

Khawaja was on track to score Australia’s first century of the tour as he and Smith continued to build their partnership.

Marnus Labuschagne has thrown his wicket away in a rare brain fart as Pakistan took two wickets back-to-back.

Labuschagne ran himself out for a duck when his decision to scamper through for a quick single brought him undone by an inch.

It was a huge moment as Australia fell to 2/91, after an opening stand of 82 runs.

Labuschagne dribbled the ball to mid off with a weak cover drive, but his gamble against fielder Sajid Khan blew up in his face.

Khan had three stumps to aim at and his brilliant piece of fielding caught Labuschagne short.

“He’s only got himself to blame there,” Aussie test great Simon Katich said in TV commentary.

Replays showed Labuschagne made a decisive call as soon as the ball bounced off the bat — but he simply misjudged the run.

The SEN commentary team called it a “disaster”.

You could see how shattered Labuschagne was when he emerged in the Aussie dressing room.

“He’s not looking too happy at the moment Marnus. He’s devastated.”

David Warner became the first wicket of the test to fall when he was on the receiving end of a sweet delivery from Faheem Ashraf.

Ashraf got the ball talking and it moved away from Warner before it collected an edge and sailed through to keeper Mohammad Rizwan.

Warner fell for 36 — the second time this series he has failed to reach a century despite getting a start and settling in to his innings.

What on earth is going on in Pakistan?

The Second Test was just a few overs old when Pakistan was forced to move its second slip forward considerably after several slight edges dropped well short of the slips cordon early in Australia’s innings.

It is a concerning sight after a lifeless deck in Rawalpindi ruined the First Test.

He was also caught on the pads several times.

Pakistan took matters into their own hands with captain Babar Azam moving his second slip forward because of the lifeless bounce being produced by the pitch.

Australia are batting first in Karachi with just one change to the team from the dour first Test. Leg spinner Mitchell Swepson is in for quick Josh Hazlewood, while Pakistan made two changes, recalling pace bowler Hasan Ali and allrounder Faheem Ashraf for Naseem Shah and Iftikhar Ahmed.

Swepson was handed his Baggy Green by his Queensland state captain Usman Khawaja. Pakistan brought back frontline paceman Hasan Ali and allrounder Faheem Ashraf — who both missed the first Test due to injuries – replacing Iftikhar Ahmed and Naseem Shah.

Pakistan have hit back at criticisms of the first Test pitch as captain Babar Azam said his side was not scared of Australia.

The match was a dour draw in Australia’s first Test in Pakistan in 24 years as it became the Test with the fewest wickets fall in a match of over 330 overs this century as just 14 fell over the five days.

Pakistan have hit back over the week, but on the eve of the second Test, captain Azam said the boredom of the first Test was not a sign that Pakistan were scared of Australia’s bowling stocks.

“Every venue has different condition. Nothing to worry,” Babar told the reporters.

“This is a wrong perception that we’re scared of Australia or Pakistani batters played with a defensive approach in Rawalpindi Test.”

Pakistan opener Imam-ul-Haq, who scored his first two Test centuries in the match with 157 in the first and 111 not out in the second, said it’s not like other nations consult Pakistan before Test matches when they’re away.

“A draw is something nobody wants to see,” Imam had told ESPNcricinfo on Thursday.

“But when we go to Australian conditions, they don’t make pitches consulting us but make it according to their will so I think we should see our strength and should live up to our strength.”

Then again, generally teams look for conditions that will help them win rather than give no opportunity for either side to compete.

“I understand the frustration of the fans,” Ramiz said in a video posted on PCB’s Twitter account.

“Undoubtedly, it would have been very good if we had a result but this is a three-Test series and we need to understand that a lot of cricket still remains to be played.

“Just for the heck of it, we can’t prepare a fast pitch or a bouncy pitch and put the game in Australia’s lap.

“It’s important that when we play at home, we play to our strengths. We also had limited resources, unfortunately.”

Steve Smith said the pitch was not offering much on day four.

“It’s pretty benign,” Smith told reporters. “There’s not a great deal of pace and bounce in it for the seamers, that’s for sure.

“I think the spinners have offered a little bit. When you’ve hit the right length there’s been a bit of natural variation, and when you get it out a bit wider into the rough there’s a bit there as well.

“But outside of that, I don’t think there’s a great deal on offer for the fast bowlers … It’s a pretty benign, dead wicket.

“There’s not very much bounce, not a great deal of pace and if you’re bowling stump to stump and setting straight fields it’s not overly easy to score … but also probably difficult to get out as well.”