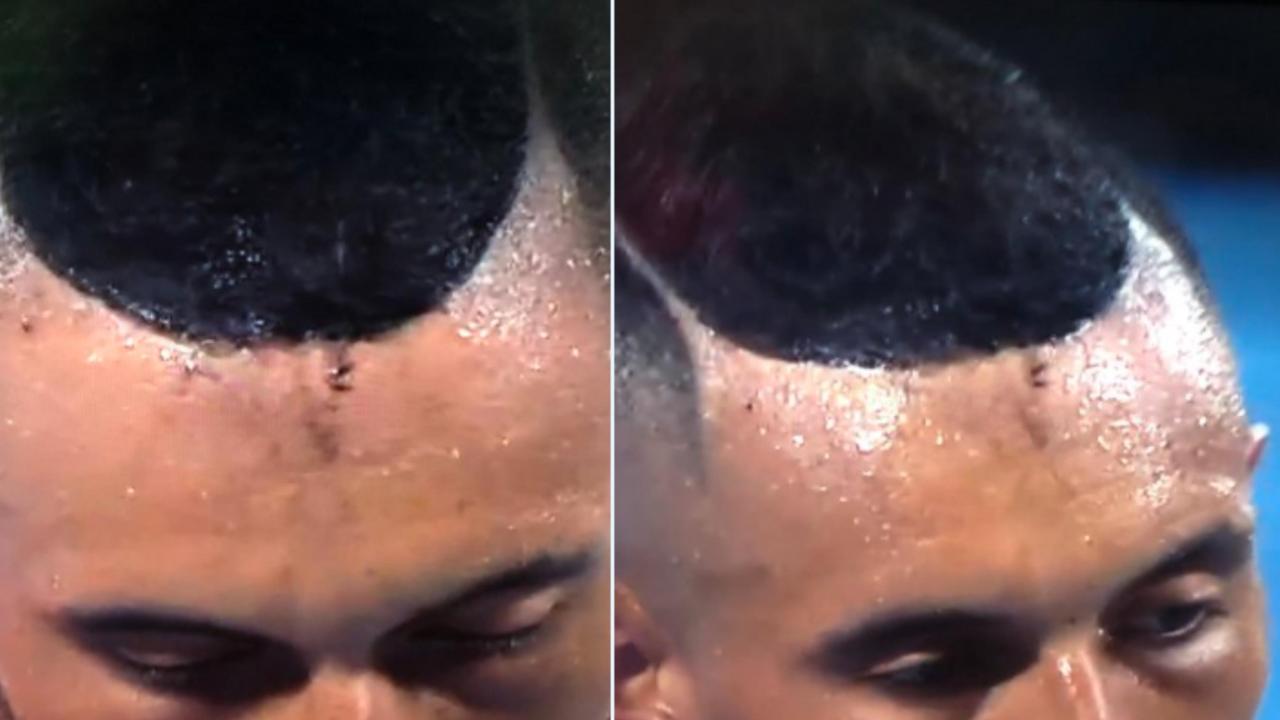 There aren’t many ways to link Nick Kyrgos to Donald Trump’s mate Rudy Giuliani, but the hot conditions on Rod Laver Arena did just that. Day 5 LIVE

There aren’t many ways to link Nick Kyrgos to Donald Trump’s mate Rudy Giuliani, but the hot conditions on Rod Laver Arena did just that.

Kyrgios was reaching for the towel a lot during his clash with Danil Medvedev.

No doubt the Aussie superstar was sweating, he was giving everything he had in the tank against the world No 2.

He pushed the top seed to four sets in a match which fell just shy of three hours.

This is less than a week after recovering from Covid.

But was it perhaps also to cover up the fact he might be getting a little help in keeping his hair in impeccable form?

Images from the blockbuster showdown shared on social media suggest Kyrgios might have been sweating some hair dye beads.

We’ve all got few greys to cover up and given how exciting Kyrgios plays, we’re fully expecting to have a few more by week’s end.

Football reporter James Dodd tweeted: “Is that a bit of ‘Just For Men’ dribbling down Kyrgios’ forehead?”

This story will automatically refresh every 60 seconds
(all times AEDT)

Benoit Paire is best described as the Nick Kyrgios of France.

Brash, opinionated, talented but not always at his best and always dividing opinion.

He made more headlines last year for spitting on court and his general behaviour than he did for any victories or success.

He’s a hard nut that seemingly doesn’t care what we think.

But there’s always a soft side isn’t there which is what made his post match interview after he defeated Grigor Dimitrov on day four so moving.

The might Frenchman, who has had a torrid 18 months, was reduced to tears on court.

“I am happy,” he said. “It’s not been easy since the beginning of last year.

“I know that my parents and everyone are watching. This really was exceptional.”

Paire then had to pause the discussion to compose himself.

Wiping away tears, he continued: “It was a shit year last year. It was really complicated.

“This year started shit, I tested positive and had seven days in isolation so it started like shit again. But I’m here, I’m hanging on. This was one of my best matches in a long time.

“I’ve been criticised a lot. When I pull off wins like this and have the French fans, really there is nothing better.”

9:29am PLAYER ARRIVED IN AUS COVID POSITIVE
Tennis star Andrey Rublev has revealed he was allowed into Australia with Covid despite the ugly Novak Djokovic row.

The 24-year-old Russian is set to face Marin Cilic in the third round of the Australian Open after beating Ricardas Beraknis.

And ahead of that match-up he has revealed how his own battle with coronavirus before the Grand Slam tournament left him uncertain on whether he would be in Melbourne.

But even though he was still positive for Covid upon his arrival Down Under, he was let in and is no longer being tested.

Speaking to Sport Klub, Rublev said: “I am not being tested personally now because I just got over the coronavirus.

“When I flew to Australia, I was still positive, but the level of Covid SS, as it is called, I will not lie, it was very low and not dangerous.

“I was allowed to enter the country. In addition, I spent more than ten days in quarantine.”

Rublev tested positive on December 27 and it is widely understood traces of Covid showed on tests due to him shedding the virus.

Per the government website it appears the superstar followed all protocols.

Originally published by The Sun

9am STOP THE SIUUUUUU
I hold Cristiano Ronaldo personally responsible for the most irritating sound in sport since the vuvuzela of 2010.

And I mean no disrespect to the Portuguese language when I say that.

I understand the origins of the Siiiuuuuu chant, but why is it at the Australian Open?

Why is a football chant making its way on to a tennis court?

Why are crowds so entertained by a noise that makes them sound like they’re booing some of the greatest sporting talent in the world?

I have so many questions about this ridiculous trend.

I’m all about a crowd getting behind a home favourite and creating an atmosphere but honestly watching grown men and women boo/siuuuu and heckle a player between points, between serves even and between games grow up.

Danil Medvedev had every right to voice his frustrations with the crowd after the match.

Andy Murray has done similar this week.
There’s a time and a place for this siuuuu nonsense and it’s never and nowhere.

The best tennis player in the world says Melburnians who cheered between his serves “probably have a low IQ” as he lashed Thursday night’s Rod Laver Arena crowd as “disrespectful”.

Big-serving Russian Daniil Medvedev waltzed past hometown hero Nick Kyrgios in four sets, but it was his encore match against the public – and awkward on-court interview with Jim Courier – that stole the show.

The Cristiano Ronaldo-inspired ‘Siuuu’ chant has spread like Omicron across Melbourne Park crowds this week, and while several players have mistaken it for boos it appeared Medvedev was actually on the receiving end of distasteful jeers.

Kyrgios spoke to Djokovic when he was locked up in detention shortly before the world’s best player was deported by the Federal Government as Tiley’s move backfired spectacularly.

“I guess it’s just been a bit of s**t-show for him, so I was just making sure he’s all right. He’s been through worse, I’m sure he just wanted to get away from it all.”

7:40am Good morning we are here for day 5! It’s the morning after the night before and if, like me you’re still recovering from the Kyrgios-Medvedev four setter, strap yourself in because there’s a lot to work through.

Amid the pantomime on Rod Laver Arena we perhaps missed the fact Emma Raducanu has bowed out of the tournament after struggling with blisters.

The 19-year-old, making her debut at Melbourne Park, looked on track when she raced to a 3-0 lead in the opening set against Montenegro’s Danka Kovinic.

But the 17th seed then lost five games in a row and needed a medical timeout for treatment on her right, racquet hand, and said afterwards that the blisters were so bad she had only been able to practise backhands.

Despite battling back she couldn’t stop 98th-ranked Kovinic winning 6-4, 4-6, 6-3 on Margaret Court Arena.