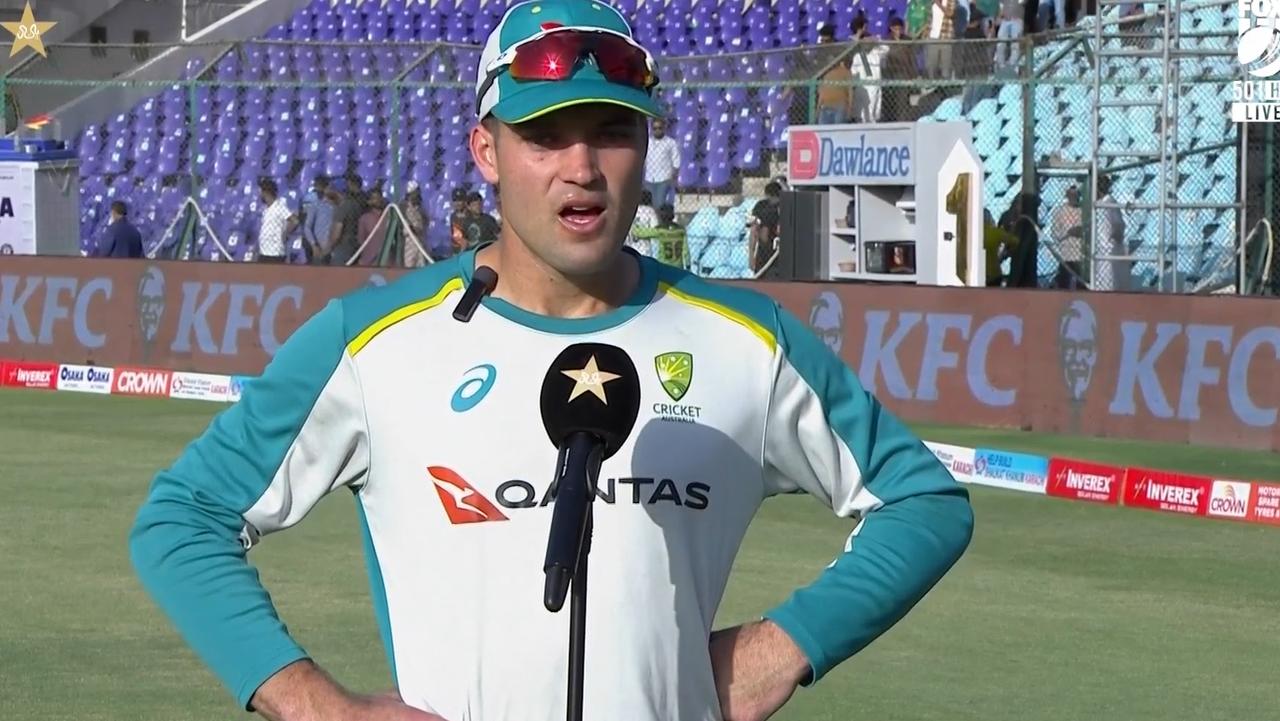 Australia’s day of dominance was soured in late drama against Pakistan as Alex Carey’s dream was taken away from him.

Australian captain Pat Cummins isn’t even trying to hide his strategy of grinding Pakistan into the dusty Karachi pitch as the second day of the Second Test came and went without a declaration.

Australia will resume on Monday at 8/505 after Alex Carey was knocked over just seven runs short of a maiden test century with just three overs left in the day’s play.

Carey’s near-miss will take some of the sweetness out of the mouths of the Aussie dressing room, despite another day where the bat dominated the ball.

Usman Khawaja was still the star for most of the day as he went past 150 for just the third time in his test career before his epic innings ended on 160.

The Pakistan-born batter on Saturday night became the first Australian since Mark Waugh in 1998 to score a test century on Pakistan soil.

Carey seemed on track to join Khawaja in reaching triple-figures, but part-timer Babar Azam had other ideas.

Trying to score quickly with just a few over left in the day before stumps, Carey was clean bowled trying to sweep across his body to a delivery that stayed slightly low.

Carey’s innings of 93 from 159 balls was his highest ever score in test cricket, but that hundred score remains elusive.

English cricket commentator Rob Key said it was a moment of “heartbreak”.

“There are times you just have to feel absolutely gutted for a sportsperson and… you can almost feel the pain of what Alex Carey has done trying to get there before the close,” he said.

As Carey walked past his teammates into the Aussie dressing room Aussie test great Simon Katich said: “They’ll be shattered for him. They’ll be proud of the knock though”.

Playing in his first series overseas, Head went past his previous highest score in test cricket when he went past 51.

It is just the second time he has scored a test fifty.

Cameron Green fell for 28 just a few minutes before the tea break.

The all-rounder was knocked over by spinner Nauman Ali, who got the ball to turn violently away from the Aussie batsman after it had been shaping in towards Green’s leg stump.

However, the extreme bounce and turn saw the ball slide past Green’s bat and into his off stump.

Usman Khawaja was finally brought undone on the 369th delivery of his innings when spinner Sajid Khan got the ball to spin past his outside edge.

Khan bowled a beauty to have the ball land on off stump before it straightened away from the batsman and went on to crash into the top of off stump.

There was very little Khawaja could do.

“It was the previous delivery that did the job, but this one just landed on that off-stump line and spun enough to hit the off-stump and Sajid Khan delighted, happy, excited, all over the place and why not, he’s got a big wicket here.”

His dismissal on 160 was the third time he has scored more than 150, but he was unable to surpass his career-best score of 174.

Head gone on the back of iffy DRS

Travis Head is the only Australian batsman yet to reach a score of 30 in Pakistan after he was trapped in front by Sajid Khan.

A pitched-up delivery struck Head low on the pads in line with middle stump. However, the ball appeared to be angling towards the leg side.

Head reviewed the dismissal after being given out by the on-field umpire.

The DRS judged half the ball was going on to hit leg stump.

It was a sweet moment for Pakistan after the DRS went against them earlier in the day when Nathan Lyon was given not out despite DRS ball tracking showing the ball was going on to his stumps.

Usman Khawaja has gone past 150 for just the third time in his test career.

He is now within reach of his highest ever test score of 174.

Pakistan players were visibly angry when Nathan Lyon escaped a DRS challenge, despite the technology showing the ball was going on to hit the stumps.

In just the third over of the day, Hasan Ali trapped Lyon on the pads in front of the pegs with a good length delivery that cut in towards his body and snuck past the inside edge.

The ball hit Lyon just above the knee roll and the DRS suggested almost half of the ball was going on to his the top of Lyon’s leg stump.

Pakistan was able to keep its review as a result of the inconclusive DRS verdict, but it was cold comfort as Pakistan had to swallow the decision going against them purely because on-field umpire Aleem Dar gave it not out.

Video umpire Rashid Riaz said the decision had to stay as “umpire’s call” because less than half the ball would have struck the stumps.

Ali was seen shaking his head as he walked back to bowl the next delivery after the DRS decision was shown on the big screen.

TV commentator Mike Haysman said: “It doesn’t seem right to me that the same ball can be either out or not out based on the original call at the speed of light.”

Aussie test great Simon Katich also said the DRS system needs to be looked at when it comes to decisions being based on the on-field umpire’s original decision. Lyon was only on three runs at the time and it ended up being a very costly umpires decision as Australia reached 3/301 at the first drinks break with Lyon on 37.

Nathan Lyon frustrated Pakistan in an entertaining cameo before finally getting knocked over by quick Faheem Ashraf.

Lyon and Khawaja put on 54 runs for the fourth wicket with Lyon clean bowled by Ashraf for 37, having earlier been given a life by a controversial DRS verdict that went his way when his score was just three runs.

The Aussies would have piled on more runs if it wasn’t for Pakistan resorting to negative tactics and field placings even before the tea break.

Cricket commentators were scathing of the tactic which saw Pakistan’s spinners bowling around the wicket and down the leg side of Khawaja and Smith.

It was a clear tactic to slow the run rate down – but it also surrendered any home the hope side had of breaking the partnership.

But Pakistan vice-captain Mohammad Rizwan defended the strategy, arguing it wasn’t a negative tactic and his team was just trying to slow Australia’s scoring rate.

“You can’t call it negative strategy, we did what we thought is in the best interest of the team,” Rizwan told reporters.

“We wanted to dry the runs after Australia made good use of the advantage they gained by winning the toss. They capitalised on that by putting on 100 runs in the first session. We had to dry the runs. This is not negativity.

“Such tactics cannot be considered as negative as other big teams also do these things, and thankfully our bowlers did make a comeback.

“You plan session by session in Test cricket, Smith’s wicket took us back in the game. We will try to get them out as early as possible tomorrow and then post a big score on board.”