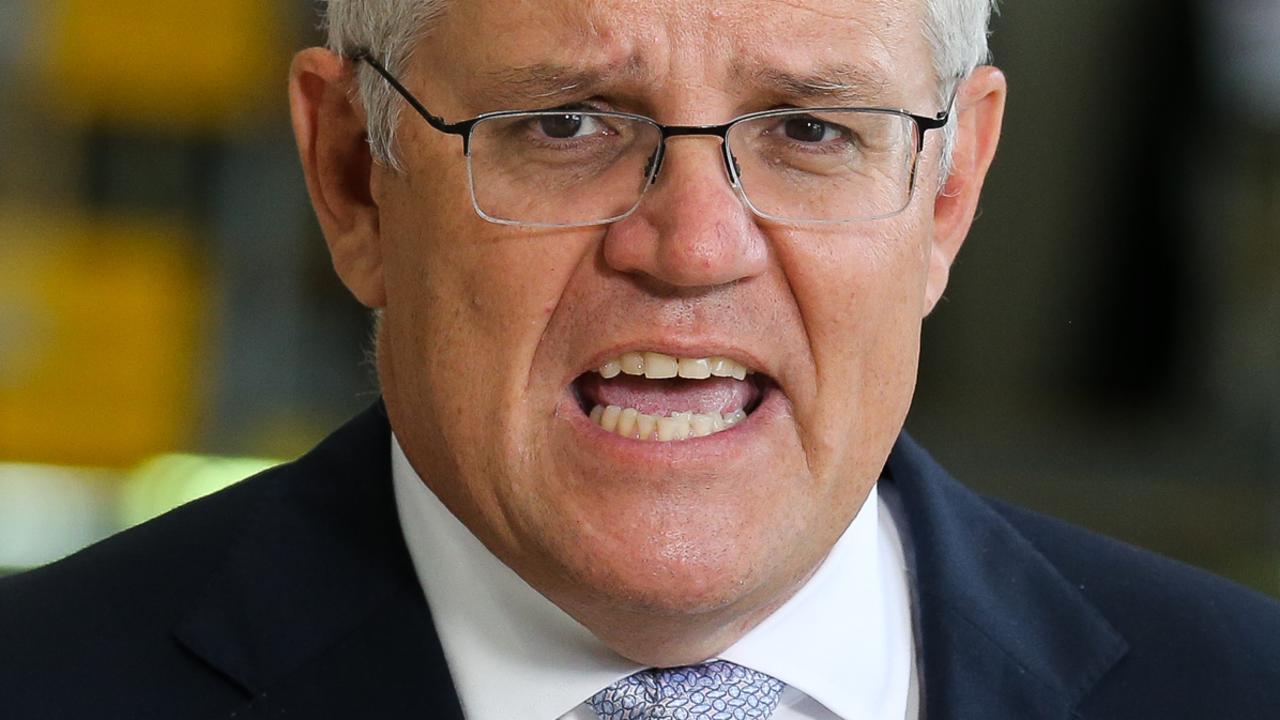 A senior government minister has furiously denied he is the mystery frontbencher who scathed about the PM after he was publicly accused on social media.

Defence Minister Peter Dutton has furiously denied he is the mystery frontbencher who called the Prime Minister a “complete psycho” after he was publicly accused on social media.

Former NSW Premier Bob Carr took to Twitter on Sunday night to insist that the mystery man was the Defence Minister but provided zero evidence to support the wild claim.

“The minister who shared the text with van Onselen and gave permission to use it was Peter Dutton,’’ Mr Carr said.

“If PM Morrison has one more week in free fall the prospect of a leadership change pre-election is real. Party rules don’t count if most MPs think you will lead them to defeat.”

Contacted by news.com.au, Mr Carr insisted his sources were impeccable but he wouldn’t be providing any information on who told him or why he was so convinced he had solved the greatest whodunit in Australian politics since J.R was shot in the 1980 episode of Dynasty titled: A House Divided.

“Bob Carr’s tweet is baseless, untrue and should be deleted,’’ he said.

The Defence Minister has previously rejected the allegation he is the culprit on national television last week during an interview with the ABC’s Laura Tingle.

Tingle confronted the Defence Minister bluntly, asking if the mystery cabinet minister who called the Prime Minister a “complete psycho” was him.

“Speaking of conflict, Mr Dutton, we have seen text messages leaked against the Prime Minister this week. Malcolm Turnbull suggested that it was Colonel Mustard responsible. Were you responsible for the leak?’’ she said.

While the journalist who broke the story – Network Ten journalist Peter van Onselen – insists the mystery MP is a federal cabinet minister he has never said the leaker was from NSW.

“There’s doubt about all aspects of this,’’ Mr Dutton continued.

“I’d love to know what you say about me to your colleagues in your private text messages. To be honest, I don’t really care. But the reality is that people say things that are exaggerated or heated at a particular point in time.”

A political headkicker, Mr Dutton has demonstrated his fondness for spiky texts in the past after he once described a journalist as “a mad f***ing witch” and then accidentally sent it to her.

Political insiders speculating on possible culprits have also returned to an article in the Sydney Morning Herald last year where the political editor Peter Hartcher claimed the NSW Premier would prefer if Peter Dutton was the Prime Minister.

“In private, she is scathing. The NSW Premier has told Liberal colleagues she’d have preferred that Peter Dutton had won the last federal leadership ballot – she’d rather be dealing with Dutton because Morrison is so unpleasant, she’s said. She described the PM as a “bully”,’’ Hartcher wrote.

“Berejiklian went so far as to tell a colleague that Morrison’s behaviour was “evil”. She and many of her colleagues are still angry at the fact that Morrison’s press office phoned political reporters in a background effort to discredit her, so-called “briefing against her”, over the vaccine rollout a few weeks ago.”

The historical flashpoint in relations between the NSW Premier’s office and the Prime Minister’s office has always been claims that Mr Morrison’s office was briefing against Ms Berejiklian to Canberra press gallery journalists during the bushfires and the pandemic.

According to reports, this led to a screaming match between staff in the respective offices in one incident last year.

At the time of the leaked text messages being handed to Channel 10’s Peter van Onselen, the NSW Premier was enraged by a report by The Australian’s Sharri Markson on January 4, 2020, that NSW had resisted overtures to offer navy ships to evacuate people in coastal regions from beaches.

She blamed the story on Mr Morrison’s supporters briefing against her. At the time the Defence Minister was Linda Reynolds, who has also denied being the source of the leaked text messages.

Around the same time of these disagreements, Van Onslen was provided with the texts to “reassure him” he could go hard on the anger in government ranks towards Mr Morrison.

He also started boasting to other MPs privately that he had explosive texts and was waiting for the right to use them but that he had not yet secured permission from the parties to do so.

There was another recent flashpoint last year over claims that the NSW Premier had knocked back an offer from the Prime Minister to send in the army to lockdown Sydney after the Bondi outbreak and that the PM had urged her to lockdown earlier.

At the time, there were reports the Prime Minister’s office had first briefed reporters this was not happening and subsequently briefed that it was a great idea that the NSW Premier had rejected as cases soared.

While it’s not known what the motivation was to “green light” journalist Peter van Onselen to release the texts he’s known about for two years now, one likely trigger is anger towards the Prime Minister over NSW preselections and concern over the performance of NSW Premier Dom Perrottet.

Speaking on the ABC’s 7.30 program last week, former Prime Minister Malcolm Turnbull said the brutal character assessment that his successor was a “complete psycho” was no surprise.

“I wasn’t surprised by the content. I was a little bit surprised they found their way into the public domain,” he said.

“Clearly, whoever authorised [Network 10 journalist] Mr [Peter] van Onselen to release that did not have Scott Morrison’s best interests at heart,” he said.

“Yes. I will name the culprit,’’ Mr Turnbull deadpanned.

“It was Colonel Mustard in the library with a smartphone,’’ he said.

Ms Berejiklian has issued a statement declaring she “does not recall” sending or receiving the messages but failed to unequivocally deny she was part of the conversation.