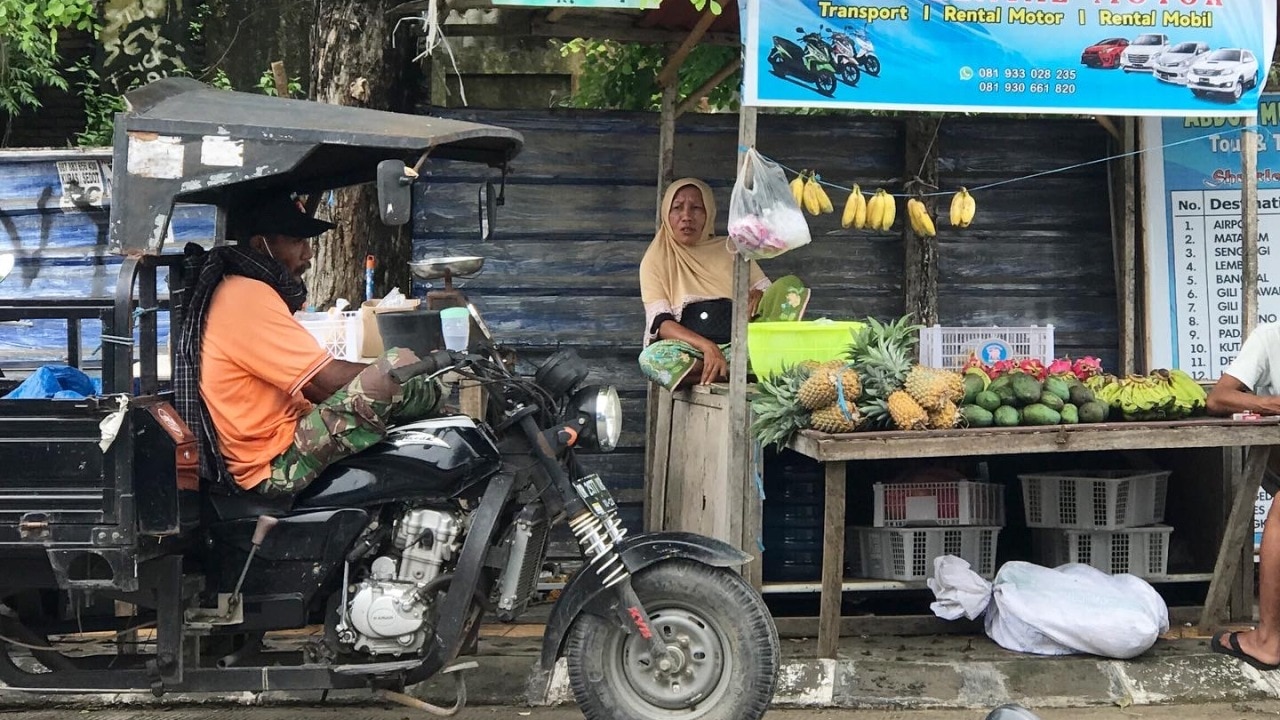 
It has been six months since I moved to Bali, and while I’ve travelled around the island – up north-west to the incredible West Bali National Park, into the cool mountainous highlands of Kintamani, and along the wild jungled East Coast, I’ve started to get itchy feet.

The incredible Indonesian archipelago is on my doorstep waiting to be explored.

The conditions to travel domestically have to be right though. Since the string of lockdowns began in July it hasn’t been easy to navigate the regulations for travel both domestically and internationally, so much so that I haven’t bothered to try.

About six weeks before Christmas the government stated that domestic borders would be closed during that busy holiday period between Christmas and New Year, so I ruled out going elsewhere. But two weeks before the break, the rules backflipped. We could travel domestically if we followed strict Covid regulations. Lombok, the island immediately to Bali’s east, seemed like a good first getaway.  Known for its white sand stunning beaches, and culturally different given its predominantly Muslim population, it promised a real travel buzz. What’s more, we could avoid airports and turn it into an adventure by taking our motorbikes on the five-hour crossing by ferry.

The rules seemed straightforward: adults and children over 12 needed to be double vaccinated, and the whole family needed to have evidence of a negative Rapid Antigen Test within 24 hours of departure and again when returning. Following rules is all very well, as long as it’s possible. Home test kits aren’t available here so how easy would it be to get a RAT in Bali? More perplexing still, how difficult would it be in Lombok, which doesn’t have the tourism or medical infrastructure to match Bali’s?

Turns out, it’s easy as downing a Bintang on a beach in the heat. The day before departure, the family – all four of us – walked straight  into one of Canggu’s busier medical clinics without an appointment. We handed over our passports, the equivalent of $11 (for foreigners, just slightly higher than the $9 charge for locals), and five minutes later that horrid swab was doing its job tickling my brain. The  results – negative – were reported to us within two minutes, and 15 minutes later we had the print-outs ready to go.

At the ferry port in Padang Bai, on Bali’s east coast, we were ushered on our motorbikes through simple security checks. First to show our ferry tickets and RAT paperwork. Then to scan our PeduliLindungi, Indonesia’s ubiquitous (and unpronounceable) app that stores vaccination certificates online. After that we were free to enjoy our holiday.

Somewhat incredibly (and almost amusingly), coming home on the Lombok side it was even easier. We would normally have had the option of an in-house test at our accommodation, but there were no clinicians available on the New Year’s Day public holiday. It didn’t matter. In the port town of Lembar where ferry’s depart for Indonesian destinations on an hourly basis, enterprising roadside shops (that might have been little warung eateries in a previous life) spruiked big ‘Get your Rapid Antigen Test here’ signs. One even had a tout ushering potential ‘customers’ in. Following his lead, we parked our motorbikes right out the front of one shop and walked straight in. A surplus of seats and a free instant coffee station in the corner indicated that this place might attract a crowd, but it was unlikely. On this busy holiday period we were the only people in attendance. Accordingly, we didn’t even wait to be tested. A man behind a perspex screen poked his arm through a hole and with admirable dexterity swabbed our nostrils one by one. The results were almost instant – negative. An hour later we were on the ferry headed home.

Anecdotally, it is a similar experience for PCR tests when travelling by plane and internationally. Friends who flew from Bali to Lombok to meet us reported their PCR results took 24 hours to come through, and that they were easily obtained and processed.

On the way home, riding our motorbikes through the chaotic streets of Denpasar, a policeman pulled up at the traffic lights alongside my partner Phil and motioned for him to pull his mask up over his nose. It was a reminder that despite an easing of precautions masks are still being worn in Bali – people are conscious that it’s one of the few things that can be done to keep Covid at bay.

Meanwhile, despite media reports of an influx of people testing positive in hotel quarantine, Indonesian borders have opened to all countries and quarantine has eased back from 14 days to seven. Omicron might be coming, but it’s not here yet. At least for now, Indonesia has the RATs to prove it.

–The truth about Bali’s best hotels