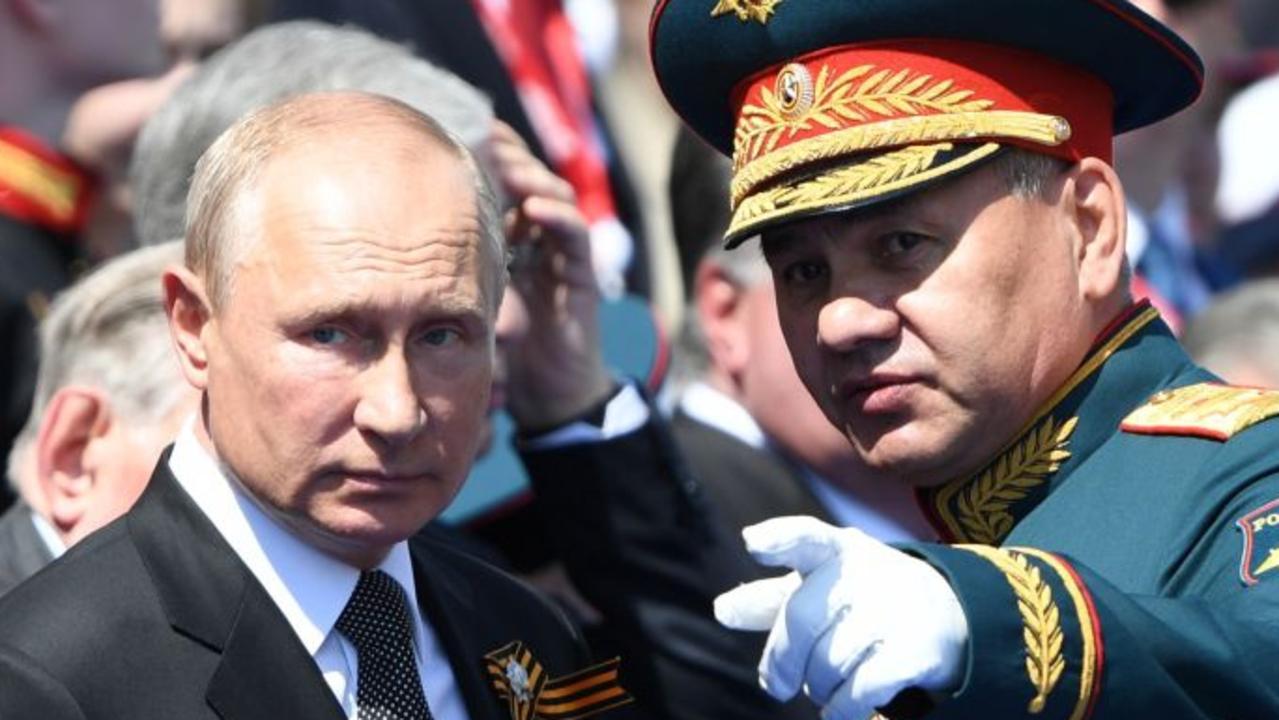 Russian President Vladimir Putin appears to be losing his grip on power. Now speculation of a coup surrounds him.

The Ides of March is approaching. It’s the day the dictator Julius Caesar fell – stabbed to death in the Roman Senate.

Notice the extreme distance between him and his leading general, Sergey Shoygu?

What about the way he openly bullied his spy chief on national television?

And all those dodgy billionaires can’t be happy at losing their luxury yachts, international holiday homes and prestigious schooling for their children.

Then there are the street protests. And thousands of arrests. Surely that bodes poorly for Mr Putin’s grip on power?

“But Putin has been preparing for the risks posed by a palace or military coup for decades. The Russian coercive apparatus has multiple mechanisms to prevent a coup.”

And accounts of Russia’s unwillingness to back the invasion of Ukraine may be overblown.

So how real is the prospect of a “palace coup” within the Kremlin? Is it wishful thinking? Or is a potential “Brutus” waiting in the wings?

Or can Mr Putin find an “off-ramp” before things spiral out of control?

“Negotiations only succeed when the protagonists are willing and able to make peace,” Council on Foreign Relations president Richard Haas says. “Mr Putin is able. I see zero will. Now that would have to change. How could it change? Increasing costs on the battlefield or … something happens back home.”

Rotten to the core

The more immediate threat to Mr Putin’s rule, says Mr Haas, are the members of his inner circle – those forced to sit at the end of the 6m-long white table.

“Some of them may decide he’s out of control, that what Putin is going to do will so discredit all of us,” he says. “One has to hope the people with a degree of proximity and access to Vladimir Putin are beginning to think this way.”

But in this modern era of all-pervasive surveillance, building an alliance would be difficult.

“So it’s risky. It’s always risky you’re going to be found out,” says Mr Haas. “But one hopes this combination of Ukrainian resistance, economic sanctions, the threat of war crimes, popular dissatisfaction … one has to hope this builds some real pressure on the home front.

“We’re not there yet. But I’m hoping we get there.”

The signs of stress are there to be seen.

“We saw the televised Security Council meeting at which Putin was ostensibly there to get briefings from the most powerful officials in his country. And yet he bullied them,” Royal United Services Institute (RUSI) Russia analyst Dr Mark Galeotti says.

“He browbeat them. I never thought I would feel sorry for Sergey Naryshkin, the head of the Foreign Intelligence Service, but he really was openly bullied.”

Are bruised inner-sanctum egos enough? Are his billionaires hurting enough?

Dr Sullivan says too many of them remain untargeted. “I fear they all have enough mansions, superyachts, and cryptocurrency to stay ahead of seizures,” he adds.

“Why not supercharge The Magnitsky Act and turn it into a hypersonic weapon?” he asks. “The reason is that on a cost-benefit analysis the costs to us outweigh any benefits to Ukraine.”

“Of course, it’s a miserable time to be an ordinary Russian, which I think is a problematic thing,” says Dr Galeotti. “There’s always a sort of strategy where you squeeze ordinary Russians to the point they topple Putin.”

The peasants are revolting

And national moods can shift fast.

“I don’t think Mr Putin’s done a terribly effective job of selling the necessity of this war,” he adds. “I don’t know how people will react to images of Russian soldiers coming back as casualties. But we’re seeing a beginning. The Russians are clearly unhappy. Thousands have been arrested. But will it get to the point of critical mass? I don’t know. It’s still early days.”

This is where the swiftness and severity of international sanctions come into play.

Prices are exploding as the ruble collapses. Shortages of basics are imminent.

Then there’s the hopes and aspirations of younger generations.

The Russian Field poll revealed that support for the war was about 40 per cent among those aged 18-29.

That may fall further, says Mr Haas: “They look at their future and go, ‘Oh my god, we’re going to be pariahs for the rest of my life. And I’m only 20 years old; I don’t want this to be my life’ … then suddenly there is an enormous amount of popular frustration.”

But that frustration will have to spill onto the streets to have any meaningful effect.

“This is an increasingly authoritarian and frankly, spitefully intolerant regime,” says Dr Galeotti. “It takes a lot of guts to actually stand up against it, knowing that your liberty, your livelihood, are both on the line and maybe your kneecaps as well.”

But that’s just the start. It then becomes a contest of resolve.

“People Power only ever works when the security forces are divided, demoralised, and so forth. We can go back to Lenin, who said revolutions succeed when the elite has a critical absence of will. But at the moment, unfortunately, the elite – the men with the guns, the men with the rubber truncheons – still seem willing to obey their orders.”

The power of one

Mr Putin has had almost a quarter-century to build Russia in his image. The former KGB agent is well aware of the dangers dictators face. This is why he has long since surrounded himself with those he controls, be it through personal charisma or indirect coercion.

But he’s also built up a personal “praetorian guard”.

According to Mr Casey, the Federal Protective Service (FSO) was built out of the KGB’s old 9th Directorate – a body responsible for the personal protection of Russia’s leadership.

He’s also got a personal army on call. The National Guard (Rosgvardia) provides Russia’s internal security. It is separate from the military. But it is a highly co-ordinated group designed to suppress mass protest or revolt.

“By removing the possible use of the regular army for repression at home, Rosgvardia does help reduce some of the motivations for coups,” says Mr Casey. “In comparative perspective, we know militaries really dislike being used for domestic repression”.

Then there’s the Federal Security Service (FSB). “The FSB is not only large, with its own security troops, but it has one key mechanism to prevent a military coup in Russia: the military counterintelligence department”. It monitors the behaviour of military personnel and officers.

“In short, there are a lot of mechanisms to prevent a coup in Russia. Yet in other ways, Russia also doesn’t have a typically ‘coup proofed’ military.”

While they are subject to Mr Putin’s rule, the army, navy and air force have been largely insulated from government. Military leaders don’t sit in the Kremlin’s halls of power.

“(Mr Putin’s) nephew doesn’t run the 1st armoured division in Moscow or anything like that,” says Mr Casey. “It has a professional officer corps.”

It may prove to be Mr Putin’s weakest link.

And that may be why rumours are circulating about a potential collapse in the relationship between him and his long-serving military chief, General Sergey Shoygu.

After all, he carries the blame for not giving Mr Putin the quick victory he expected.

The future is in Mr Putin’s hands. It may not be what he planned for.

“In war it is impossible to know what is going on or how trends are going to pan out,” says Dr Sullivan.

“That applies to me and you trying to piece together the bits and pieces we can see on our TVs, and it applies to the intelligence agencies which have the task of hoovering all the big data and deploying the algorithms to explain trends and advise on what to do next.”

But it hasn’t gone well for the Russian invaders.

“The fact that the Russians are escalating with these terrible conventional mass casualty munitions. And by introducing far more troops tells you that, that essentially what Mr Putin is doing is doubling down,” says Mr Haas.

He’s also doubling down at home. Protesters are being arrested. New laws punish opposing his will with 15 years imprisonment. International links through social media and the internet are being severed. Independent media has been shut down.

We don’t know what form the pressure he’s putting on his inner circle takes.

“I think the most likely scenario for actually ousting Putin is elite defection rather than a coup,” says Mr Casey. “It is really hard to co-ordinate a coup even against a hated dictator, especially with a security apparatus as extensive as Putin’s”.

Instead, key leaders and influencers may want to avoid “bloody hands”.

The prospect of using excessive force to save Mr Putin may not seem appealing. They may not want their fate to be tied to his.

“Defection is clearly not costless,” says Mr Casey, “But in my view, less costly than a failed coup attempt.”

Dr Sullivan, however, says war is unpredictable in its very nature: “We should not be surprised by the surprising, but nor should we pontificate that we know what is happening. The only certainty is that civilians are victims and we are helpless.”