Jane Ryan and Alexandra Almond loved footy, but playing it seemed out of reach — until the AFLW 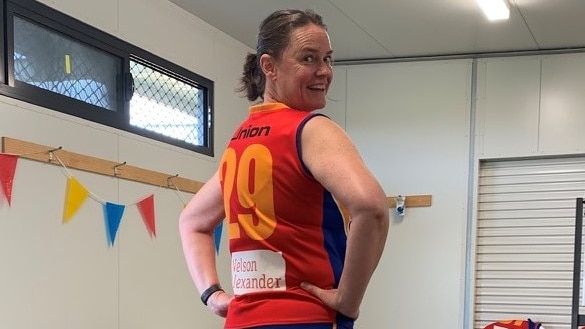 
For women of a certain age, playing Aussie rules wasn’t an option when they were children. It wasn’t something girls did.

There was no infrastructure for it, no teams, no grounds, no acknowledgement that women might like to kick the ball, join a team or tackle an opponent. But this didn’t stop them loving the game.

Alexandra Almond and Jane Ryan have loved footy since childhood but did not get to play until they reached their 40s.

“I can’t get across to you how joyful it was to be able to pick up a footy and hand pass and kick to a teammate, practise it and be in that space where that’s what we were focused on,” Ryan, 48, said.

Almond, 50, a designer from Melbourne, played her first competitive game in 2021.

The night before the game, a lifetime of waiting turned into anxiety.

“I had never been so nervous, never in my life. I was literally shaking,” she said.

“I rang one of my friends, who is not a football person, and said, ‘I actually don’t know what’s happening to me. I can’t sit down, I can’t think, I can’t do anything. I have to play football tomorrow. I’m terrified. Oh God, it’s going to be awful.'”

Almond’s dream to play started decades earlier, when she was given a football for her 11th birthday.

“It was all I wanted, but it never did me any good,” she said.

“The boys wouldn’t play with me and the girls weren’t interested. So the most I ever did with my footy was play kick to kick with my brother.

“I grew up in Bendigo in the 1980s and girls didn’t play football or cricket or soccer or anything [like that].”

Almond played netball in winter and tennis in summer because her parents told her she had to take up a sport but she gave them up as soon as she could.

She was, and remains, a mad keen Collingwood supporter, being a foundation AFLW member and a player sponsor.

Ryan went to a Catholic primary school and “it was very clear that organised sport was girls doing netball, boys doing football”, she said.

Although Ryan’s participation was limited to sports considered acceptable for girls, she didn’t notice: She was too busy just playing it.

“I didn’t even know what my loss was, if that makes sense, because I was so consumed by sport, but I did the socially acceptable sport and it was very female-dominated,” she said.

“We had famous Essendon footballers come to our school and they presented me with my netball trophy. It didn’t clock in my 10-year-old brain that I really wanted to play football or anything.”

Like Almond, she kicked the ball around with her brothers and father and lived a life full of footy, but that of others’.

“I would go to my Dad’s games — he played in an amateur league — [and] a lot of my visceral memories are of the smells and the siren, going to Elsternwick Park. It’s just ingrained.

“I drove my brothers around to a lot of their footy games. I loved watching them play.”

Ryan went on to play high-level netball, then took up rowing after calf injuries led her to give netball away. She found an experienced crew and they won two state championships.

Then one of them saw an advertisement for a “come and try footy” day. Jane didn’t make it to the session, but her teammates did.

“They just came away grinning their chops off. They said, ‘Jane, we’ve got to do this’,” she recalled.

Facing fears and finding footy in your 40s

They joined a club in Coburg.

“We decided to give it three years to see what we could do. Only two women there had played senior football before. The rest of us were hopeless but it was just like, who cares?” Ryan said.

“It was astounding that first year, that feeling of sisterhood and the feeling that I [didn’t] care who was watching.”

She was a keen AFLW supporter when it dawned on her that perhaps the door was open for her too.

At an AFLW function, she had a chance conversation with a man involved with the Maribyrnong Park Football Club. He encouraged her to come down for a training session with their new women’s team.

“I thought, ‘What the hell? Why not? I could do this.’ I went to a training session.

“They were so welcoming and amazing and lovely. I trained with them and then COVID hit.

“We were in pre-season training in February, I trained with them in between Melbourne’s lockdowns, until we weren’t allowed to train at the end of March.

“I had become part of their community just by going along to that.”

The night before the first game, anxiety threatened to spoil Almond’s debut.

Her friend talked her through it.

“She said to me, ‘Some people are at home tonight flicking through the shopping channel because they’ve got nothing better to do. You’re excited because you’re about to fulfil a lifelong dream.’

“I had to relish that, think of it as excitement, not fear.”

Almond’s friend got her to identify her fears, one by one.

She wrote them on post-it notes and stuck them to the wall.

It worked. Almond took to the field the next day.

When asked about her first game, Ryan expressed similar feelings.

“I got a tingle up my spine. It was like a dream had come true.

“I could also share it with people I really cared about — my teammates, but also my Dad and brothers. They watched my sister and I run out onto the field. It was pretty amazing.

“Finally getting to play, I felt bereft [at what I’d missed] but also joyous.”

Fighting for the right to play

Playing football at a later age brings with it a higher likelihood of injury, as both Almond and Ryan acknowledge but, after waiting so long to compete, the women’s desire to play overshadows this.

“There’s a little bit of grief for me, wondering why I didn’t fight for it. I just watched so much of it. I did want to try it,” Ryan said.

Ryan is now president of the Darebin Falcons, a women’s sports club that has produced some of the biggest names in the AFLW, including Daisy Pearce and Darcy Vescio.

“Coming to the Falcons was like coming home”, Ryan said.

“To run onto the ground, be in the rooms and buy my own footy boots and socks. It was so familiar”.

Both Ryan and Almond have signed up for another season.

They come back for the game but also the camaraderie and all those more-intangible things that we get from sport, particularly Aussie rules.

“There’s something about being in a group of women who are just incredibly supportive and having a great time,” Almond said.

Now Ryan has finally been given her spot on the field, she’s not giving it up.

For many women, it is not about kicking a ball, it is about having the permission to participate in a sport that takes up so much time and money in this country.

“Some guys are really supportive. They tell me they want to come and watch our games,” Ryan said.

“But others who have played say, ‘Gee, I wouldn’t want to do it at your age.’

“OK, it’s not the highest-quality football that I’m putting out there, but it’s not about that.

“Even being surrounded by All-Australian players at Darebin, I was made to feel welcome in the all-female set-up. I’m not sure people get that. We should have the right.

ABC Sport is partnering with Siren Sport to elevate the coverage of Australian women in sport.

Georgina Hibberd is a writer and academic. She recently published Never Surrender, an account of the GWS Giants’ 2020 AFLW season, written from inside the club.