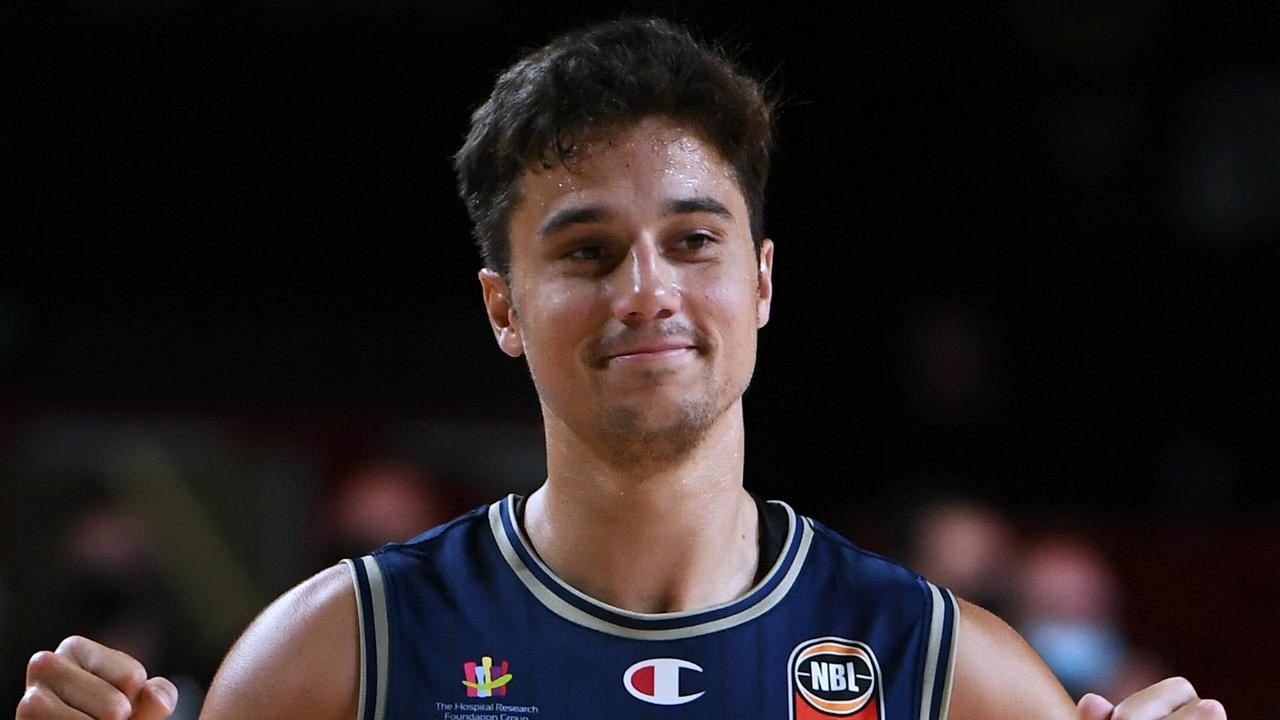 Melbourne United have proven themselves as kings of the road this season but the reigning champs were brought undone in Adelaide.

The Adelaide 36ers have halted Melbourne United’s quest for nine wins in a row in dramatic fashion, CJ Bruton’s men stunning the ladder leaders with a five-point overtime win on Sunday.

Dusty Hannahs didn’t see much court time during regulation, but the Sixers’ import exploded into action late to send the game into overtime with a clutch three-pointer with 13 seconds left on the clock.

Hannahs then poured in eight points in a frantic overtime period, with Kai Sotto nailing a jump shot to seal a memorable 90-83 win at the Adelaide Entertainment Centre.

The Sixers, who had lost their past three matches, led by 10 points early in the final term, but couldn’t hold off a late surge by the reigning champions.

United led 74-70 with less than 30 seconds on the clock before Hannahs’ heroics stole the show, the import finishing with 19 points on 7-from-12 shooting.

Watch Every Game of the 21/22 NBL Season Live & On-Demand with ESPN on Kayo. New to Kayo? Start Your Free Trial >

United ground out a 19-17 lead at the first change, but the 36ers went on a 10-0 run and their work at the defensive end was a noticeable improvement on recent showings.

United coach Dean Vickerman looked on in frustration as his side shot 1-from-11 from three-point range in the first half and notched just 11 points in the second quarter to trail 38-30 at the main break.

The 36ers recorded a season-high 24 turnovers in their disappointing loss to the JackJumpers, but it was United that failed to look after the ball in the first half, the visitors committing 10 turnovers.

Import Todd Withers, who made a season-low three points against the JackJumpers, led all scorers with 12 points in the first half and finished with an NBL career-high 17.

Sunday’s clash was United’s seventh away game in a row, which may have been a factor in some uncharacteristic performances.

Chris Goulding, the league’s leading three-point shooter, had made just one free throw in the first three quarters. He made another three free throws, but finished 0-14 from the floor and didn’t make a three-pointer from nine attempts.

Star recruit Matthew Dellavedova was also quiet on offence, with five points on 1-from-10 shooting.

Jo Lual-Acuil wasn’t having the same issues and slammed home a pair of dunks as the visitors went on a 10-0 run to set up the dramatic final period. Lual-Acuil finished with a game-high 23 points on 9-from-12 shooting.

Up next, the Sixers host the Brisbane Bullets on Thursday night, while United will play their first home game since December 19 when they take on the JackJumpers on Sunday.

If a week can be a long time in politics, it can be a world away in the NBL.

Two weeks ago, South East Melbourne Phoenix was embarrassed by the Brisbane Bullets, who enjoyed a 31-6 first quarter blitz on the way to a 100-84 win over the visitors, who had not played for 28 days due to Covid.

But the Mitch Creek-inspired Phoenix exacted sweet revenge at Nissan Arena on Saturday night with an 88-73 victory over the Bullets (4-6), who stumbled to their third-straight loss with their season on the brink of going into freefall.

The Phoenix claimed its third-straight win to move to a 6-2 record, with Creek powering to 22 points, five rebounds, three assists and three steals while also playing a shutdown defensive role in the second half when the Bullets showed some very brief signs of life.

In stark contrast to the red-hot Creek, Nathan Sobey (nine points) and Robert Franks (two points, two rebounds) were ice cold for Brisbane. They combined for just four points in the first half, with Franks not scoring until the third quarter when he also grabbed his first rebound.

Brisbane went on an 11-0 run in the third term to cut the margin to four points at three-quarter time but South East Melbourne steadied with Phoenix centre Brandon Ashley chiming in with some big plays and Brisbane scoring just six points in the last term.

The intent from the Phoenix was palpable as they took a 50-39 lead into halftime.

Creek had 13 points at the first change and 20 by the main break from eight of nine shooting from the field as he toyed with the Brisbane defence while captain Kyle Adnam was a spark off the bench with 10 points in the first half.

Bullets head coach James Duncan urged his players to “get up and in’’ on defence but they were simply unable to stop the lime green juggernaut.

Mitch Creek dominated the first half with 20 points from eight of nine shooting along with three rebounds, a steal and an assist. He came to play. Brisbane’s “Big Three” of Lamar Patterson, Nathan Sobey and Robert Franks combined for 17 points between them with Patterson contributing 13 of those (and 26 for the match). Sobey had two free throws and one field goal from one attempt while Franks had a donut in the points column after four unsuccessful attempts. Good things happen when Sobey top-scores for Brisbane but he was kept very, very quiet. Franks was non-existent.

The NBL draw has spent more time in the air than an orange at a juggling convention due to Covid so the fixture will not be overly fair just yet. But the luck of the draw has not been kind to Brisbane. In the Bullets’ 10 outings this season they have played a top four team six times – the most of any side in the NBL. South East Melbourne has played bottom six teams in seven of its eight matches. The one top four showdown was against an understrength Melbourne United.

Turnovers continue to kill the Bullets. In their five losses before Saturday night, they had 15 or more turnovers and in their four wins, they coughed the ball up less than 15 times. They had 12 by the last change and 15 for the match. Brisbane did turn around a horror shooting night against Melbourne United on Australia Day when it hit just three of 25 three-point attempts. Against the Phoenix, the Bullets hit eight of 22.