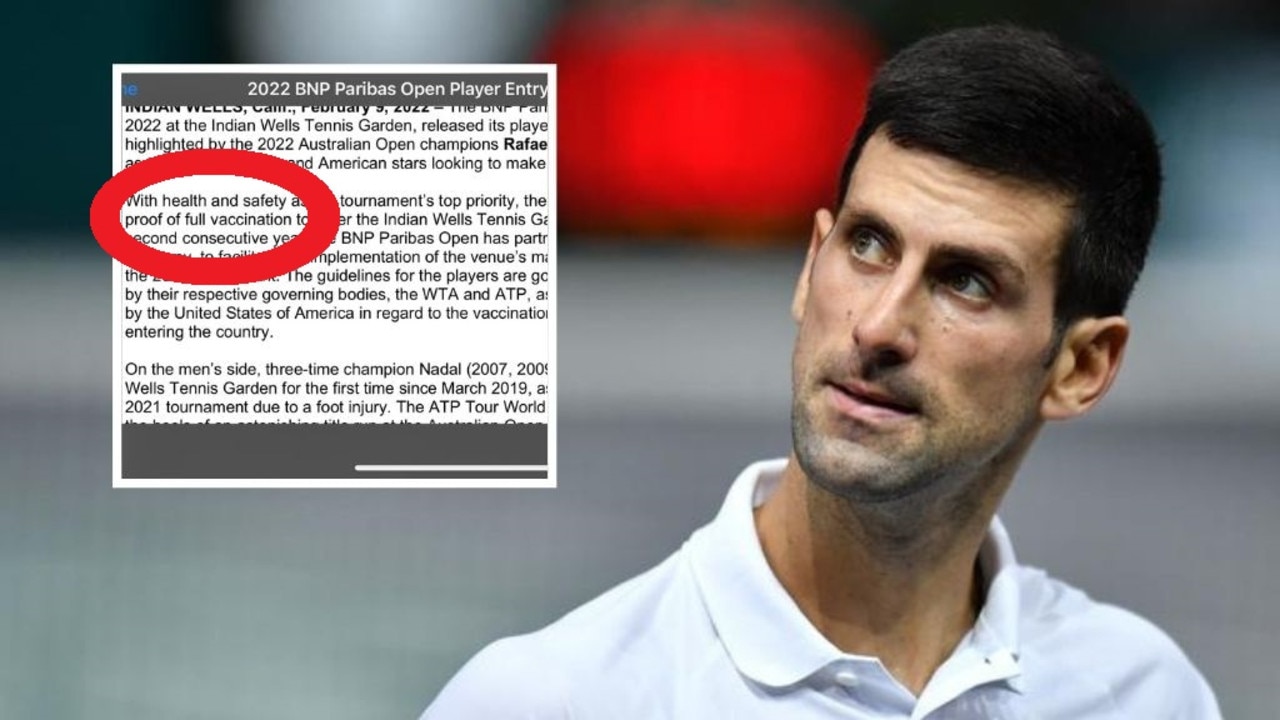 As mystery continues to swirl over whether Novak Djokovic will get the jab, we may have received a clue about his vaccination status.

Top-ranked 20-time grand slam champion Novak Djokovic, prevented from playing the Australian Open because he was not vaccinated for Covid-19, is entered in next month’s Indian Wells ATP event.

Djokovic is a five-time champion at Indian Wells, where organisers announced the player entry list on Thursday (AEDT) and said proof of full vaccination will be required for entry into the grounds for the March 7-20 tournament.

The Serbian star was set to try and win a fourth consecutive Australian Open title last month — what would have been his record 21st career major singles crown — but he was turned away at the border.

Djokovic’s visa was eventually cancelled and after a legal appeal failed he departed without playing.

Spain’s Rafael Nadal, who is also on the Indian Wells entry list, won the Australian Open to set the record with his 21st career slam singles crown.

Organisers at Indian Wells noted in a statement that vaccinations will be required for the event, but also said player protocols for Djokovic and other men’s players will be decided by the ATP in line with US restrictions.

“With health and safety as the tournament’s top priority, the BNP Paribas Open will require valid proof of full vaccination to enter the Indian Wells Tennis Garden for the tournament,” a statement said.

“The guidelines for the players are governed by the protocols established by their respective governing bodies, the WTA and ATP, as well as any restrictions established by the United States of America in regard to the vaccination status of international travellers entering the country.”

Last week author Daniel Muksch — who has written A Lifetime At War, a book chronicling Djokovic’s journey that comes out later this year — suggested watching Rafael Nadal win a historic 21st major at Melbourne Park had motivated the Serbian superstar to change his tune and get vaccinated.

Djokovic promised to reveal his side of the story to his deportation drama as he met with Serbia’s President Aleksandar Vucic in front of a throng of press last week, describing the “unfortunate events in Australia” which “was at least unexpected”.

Djokovic thanked the President for the support, along with the Serbian people after “these circumstances that found me in Australia”.

The 34-year-old said their support has shown “that this connection will be like that forever” and he promised to deliver his side of the story “in more detail”, but told President Vucic: “I wanted to see you first of all because as a citizen of Serbia I felt a great need to thank you for the great support you gave me as President of Serbia.

“Although I was alone in detention in Australia and faced many problems and challenges, I did not feel lonely.

“You stood up and stood behind me and put yourself in a compromised political position, within the framework of international relations, and that is why I am extremely grateful. I will remember that.”

Djokovic is due to return to the tour at the Dubai ATP event from February 21. Joining three-time Indian Wells winner Nadal, who missed the 2021 event due to a foot injury, and Djokovic in the field are reigning US Open champion and Australian Open runner-up Daniil Medvedev, ATP Finals winner Alexander Zverev and 2021 French Open runner-up Stefanos Tsitsipas as well as defending champion Cameron Norrie of Britain.

Australian Open champion Ash Barty tops the women’s field at Indian Wells. The reigning Wimbledon champion did not play at Indian Wells in 2021, when Spain’s Paula Badosa won the title she will try to defend.

World No. 2 Aryna Sabalenka, 2021 French Open champion and world number three Barbora Krejcikova and fourth-ranked Karolina Pliskova are also in the field, as are 2012 and 2016 winner Victoria Azarenka and 2015 champion Simona Halep.

Teen stars Leylah Fernandez of Canada and Emma Raducanu of Britain, the 19-year-olds who met in last year’s US Open final won by Raducanu, and 17-year-old American Coco Gauff will also be in the field.