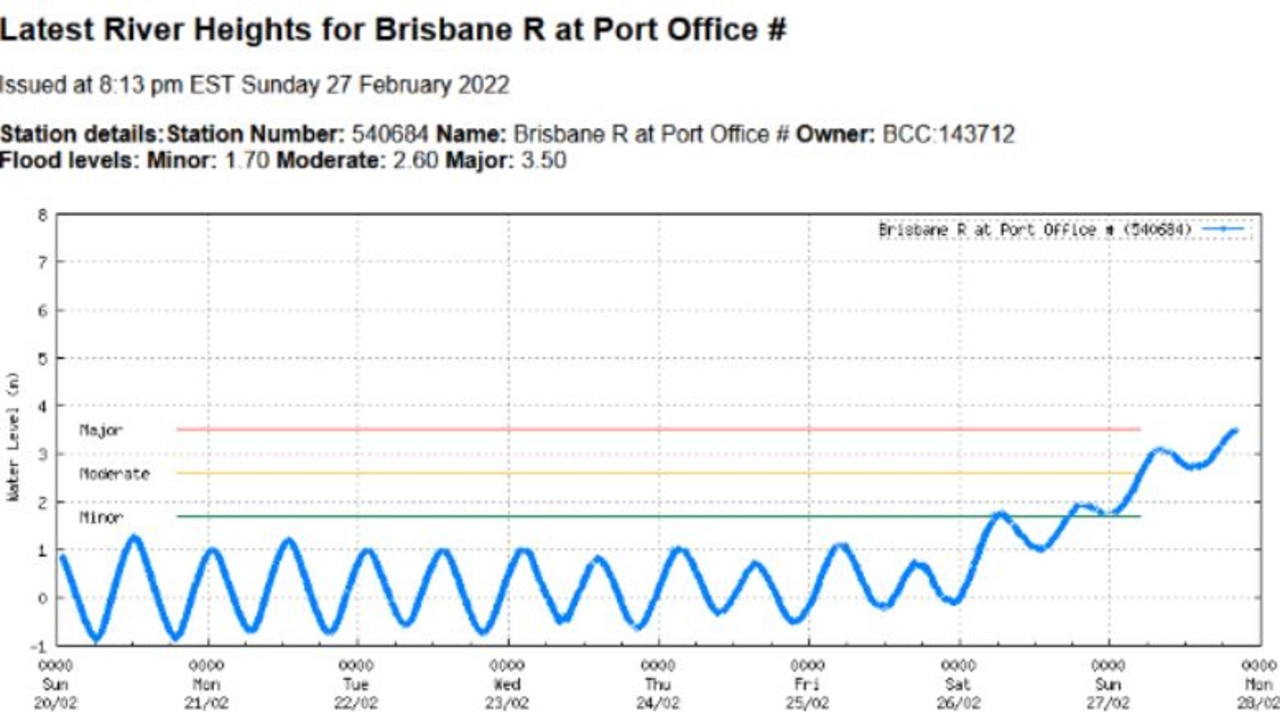 Major flooding is occurring at Brisbane City as the Brisbane River reaches 3.5m, shortly after an alert was issued for locals to evacuate if required.

Major flooding is occurring on parts of the Brisbane River on Sunday night.

The Queensland Bureau of Meteorology took to social media to share news the Brisbane River at Brisbane City has reached the major floor level of 3.5m.

“A second major flood peak is expected on Monday morning’s high tide around 8am.”

Earlier, an emergency alert was been issued by Brisbane City Council warning that “major flooding” was likely on the Brisbane River.

The Courier Mail reports text message alerts was sent around 8pm after advice was issued from the Bureau of Meteorology that the river could reach 3.7m with the high tide on Monday morning.

“Major flooding likely on the Brisbane River,” the text read.

“Evacuate if required. Stay out of flood water. Check roads and plan your journey if evacuating.”

Initial predictions from the weather bureau had the river peaking at 3.1m on Monday morning.

The peak is now expected to occur around 8am on Monday.

“Depending on a range of factors, the Brisbane River could peak at 3.7m,” Bureau of Meteorology forecaster Rosa Hoff said.

“The Brisbane River could stay in that peak for a while, it’s unlikely to drop below the moderate level for a couple of days.”

Earlier, Queensland’s premier warned that horror flooding was forecast to remain for at least another five days and announced that 986 schools would be closed.

Annastacia Palaszczuk made the grim admission on Sunday morning, as the death toll rose to six people and thousands of people cut off.

“We have done some releases from (Wivenhoe) dam. Now, that does take about 24 hours to come down so that is not impacting (the waterways) at the moment,” she said.

“With the rain easing, hopefully, over the next 24 hours we then do expect to see high levels of water in our river system for at least the next three to five days.”

Thunderstorms have been forecast to hit south east Queensland on Sunday afternoon. During the past 24 hours the SES has received more than 5,000 requests for help.

Premier Palaszczuk has also urged some communities to conserve water.

“We have some issues with the Mount Crosby treatment system. Can I ask people in the southeast to conserve water at the moment,” she said.

It comes as more than 20,000 people in Brisbane’s westside are cut off and could be isolated for days, theCourier Mail reports. The affected areas are from Pullenvale to Mt Crosby.

There are plans underway for possible food drops.

Moggill Rd, the only land access, was this afternoon cut in three places. It is unlikely to reopen tomorrow and could be cut for several days, SES coordinator for Bellbowrie-Moggill Community-led Disaster Management Group, Mark Kerle said.

Brisbane Lord Mayor Adrian Schrinneradrian said it is not yet as bad as the 2011 floods.

“What we‘re seeing unfolding in Brisbane at the moment is a combination of creep flooding, river flooding and overland flow all happening at once that. Is a different situation to what we have seen in 2011 and that is exactly why people need to stay safe,” he said.

“At the Brisbane gauge of the river monitoring levels, we‘re seeing that there was a peak this morning of around 3.1 metres. In 2011, that peak at the same location was 4.46m.

“This has been defined as a moderate flood event but it‘s still causing damage in many parts of Brisbane and that is exactly why people must stay at home.”

People have been evacuated from their homes due to rising floodwaters.

A Queensland Fire and Emergency spokesman told The Courier Mail there had been seven rescues conducted across Monkland and Gympie.

Two rescue crews were called to the home at 9.50pm on Saturday night with reports of one person trapped inside the home, which had water “quickly rising up to the windows”.

Crews had to force their way into the home where they found a woman inside.

Premier Palaszczuk has described the amount of deluge as a ‘rain bomb’.

“There is a rain bomb that‘s just sitting over the entire southeast and as I said yesterday, we are used to and South East Queensland experiencing a bit of rain over a certain catchment, this is happening right across the south-east and its constant and as I said the other day, we thought it would ease up,” she said.

Further severe weather warnings have been issued for Queensland as cities and suburbs battle rising floodwaters.

In a statement issued Sunday morning, the Bureau of Meteorology told residents to brace for more severe thunderstorms.

“Heavy rainfall which may lead to flash flooding is forecast to continue over parts of southeast Queensland today,” it said.

“Six-hourly rainfall totals between 60 and 120mm are likely to continue, reaching up to 150mm over areas southeast of Caloundra to Warwick and contracting south to the NSW border today.

“Heavy rainfall increases the potential for landslides and debris across roads. Damaging wind gusts in excess of 90 km/h are possible over coastal fringes mainly south of Caloundra and about the elevated terrain of the Gold Coast hinterland.”

Emergency services said they will resume the search for a yachtsman, aged in his 70s, who went missing on Saturday.

The search had to be suspended overnight.

On average the SES is receiving 100 calls for assistance each hour across Queensland.

It comes as thousands of homes in Brisbane are at risk of being destroyed as floodwaters continue to rise.

Suburbs at risk of flooding

A potentially catastrophic combination of an early high tide and millions of megalitres of rain hurtling down creeks and rivers has put homes at risk.

Lord Mayor Adrian Schrinner said this could be the worst flooding in more than a decade.

“For many Brisbane residents, this terrible rain event will be reviving memories of the 2011 floods,” he told The Courier Mail.

“Our latest modelling shows flows from the catchments and the potential for further Wivenhoe Dam releases into the Brisbane River may combine with tomorrow morning’s high tide (and) this could impact thousands of residential properties.

The high tide is expected around 7.30am on Sunday at the mouth of the Brisbane river. Council modelling has shown a threat of flooding more than 87 locales from Brisbane’s north towards Ipswich in the east and Logan in the south.

The city’s Wivenhoe Dam has started releasing water again – despite this putting more homes at risk of flooding.

The Courier-Mail reported a car was found in floodwaters in Indoorapilly around 2.45am on Sunday, before a 34-year-old man’s body was found in a nearby suburb.

Reports suggest the man tried to swim from his vehicle on Witton Road but did not surface.

During the deluge, Premier Annastacia Palaszczuk has urged residents to stay up to date with the latest by checking information from the Bureau of Meteorology.

On Saturday afternoon, the bureau confirmed the huge amounts of rain smashing the state.

“A dangerous and unfolding weather and flood event for southeast Queensland and northeast NSW – four-day rainfall of 1,360mm for Pomona and 709mm overnight at Mt Glorious,” it said in a statement.