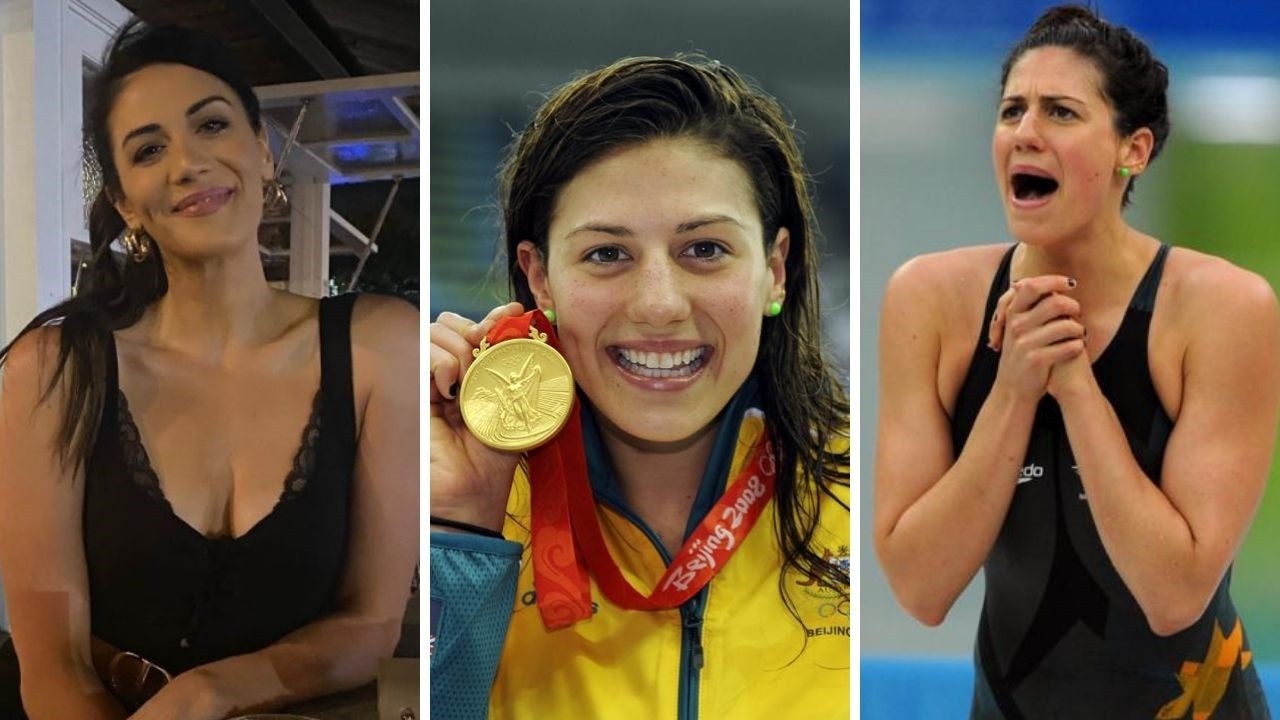 Stephanie Rice is one of Australia’s most celebrated swimmers but as a tearful Instagram video showed, there was trouble behind the scenes.

When Australian Olympic champion Stephanie Rice posted a video of herself in tears during last year’s Tokyo Games and opened up for the first time about her mental health battle, she had no idea the impact she was about to have.

On the surface Rice had the world at her feet. She was a triple Olympic gold medallist and world record holder at the age of 20 and had won multiple silver and bronze medals at world championships. She was one of Australia’s most celebrated swimmers.

But when injuries struck, things changed. Rice retired at 24 with those three Olympics gold medals in her pocket and despite the injuries, from the outside at least, the world was still her oyster. She could walk into the next chapter with no worries, the opportunities would be endless.

At first she enjoyed the “freedom” of no longer needing to train “seven hours per day” and could do what she wanted when she wanted. But the novelty quickly wore off.

Soon, she was lonely and searching for a purpose.

“I missed the community and having a specific goal to work towards and seeing that progress. I felt like I was drifting around aimlessly, not going anywhere,” Rice, who has just been announced as F45’s new ambassador, said.

“I thought, well I know how to goal-set and work towards goals and achieve goals, so I just need to think of the next big thing I’m going to do and achieve and I just didn’t know. I didn’t know what I was meant to do.

“Everyone is searching for some purpose in life and ‘What am I here for?’ I think because I didn’t have that, it then brought about ‘Who am I? What do I value? What do I stand for?’

“I realised how much of my identity was wrapped up in swimming but also the version of me as this successful swimmer, achiever and all the external gratifications, which everybody loves and needs aspects of, but I realised how low my self worth was just as a person without any of those external things.

“I think that’s also a big part of what drives success – the desire to please or achieve or show or prove something. So I spent a lot of time trying to work on myself … and I just think because at the time I felt like I was the only person to be really struggling with this identity and struggling with the peace and clarity of having direction, it just felt lonely.”

Rice wasn’t diagnosed with depression, but her battle was and is real.

“I have definitely felt anxiety, felt depressive states or low states where you just feel lost and confused and those feelings come about more when a big-time swimming competition is on because you literally cannot get away from reliving an old part of your life,” Rice said.

“My goal wasn’t to escape it or push it aside, I really just tried to lean into all those feelings that were coming back up again and allowing them to be there, work through it and nurture myself the best way I could during all of that.”

Getting to the ‘light at the end of the tunnel’

Rice has found the purpose she was searching for. Her new life as a successful businesswoman, commentator and ambassador is thriving.

But like adjusting to no longer being an elite athlete, getting to this position took time, patience and a lot of self-love.

“I’m totally OK now, I’ve come through that light at the end of the tunnel and discovered all these things but I know there are people in the thick of it and I would have loved so much, if when I was in the thick of it, somebody like myself would have come out and spoken about it because that would have helped me know that it’s possible and you can get through it … that’s why I like talking about it,” Rice said.

“It’s definitely not a linear journey. I think sport is quite linear even though it’s not linear when you’re in it, it’s still very like, ‘If I hit this milestone that will mean I qualify for this team and that will mean I get to go there’. You can really see the pathway to achieving goals, whereas life isn’t really like that and I think that’s why I struggled so much because I was always looking for the next thing.

“I don’t think it’s a one-size fits all type of formula but one of the things that helped me so much was leaning into what I was feeling and thinking and being open to try anything and everything that may work or may not work. Sometimes when you don’t know what’s going to work, knowing what doesn’t work is just as powerful.

“I think I realised through that time how important it was for me to take care of myself and such a huge part of that was just health, exercise and wellbeing, and because I had exercised for so long in my career, I didn’t for like two years and so I think it amplified the negative spiral.

“It’s why I focus now so much on rituals or routines or whatever because I’m not trying to be the world’s best athlete again but I’m definitely trying to be the best version of myself. So I go into every day and do work, whether it’s for F45 or other brands or my businesses, and I’m a better version of myself and I’m alert, I’m energetic, I’m healthy and focused and exercise, eating healthy and having a good group of people around me are all things that bring out those qualities in myself.”

Staying out of her own head

Rice’s battle with mental health and struggle to transition out of her life as an elite athlete has taught her a lot about herself, including how to recognise when she’s overthinking or starting to feel anxious or sad.

It’s this, combined with the impact of the Instagram video that has opened up her passion to help others who are struggling.

“I’m no professional but I think when you have certain emotions going on it’s because you’re stagnant in your energy or you’re rethinking about the same thing that is causing you to feel anxious or sad or whatever that is,” Rice said.

“That’s why swimming, I think, was so powerful because it’s kind of got that meditation, flow aspect. But for me just breaking that routine or interval when you notice yourself having awareness that I’m not in a good state right now, it’s not awful it’s just that I need to get out of this and getting into your body is the best way to do it, whether it’s going to an F45 class, going for a walk or getting up and doing some stretches and some jumping jacks or something.

“I find that really just breaks that rhythm and I feel there’s something so powerful in just getting your blood flowing and sweating. It just takes you out of your head and then I find I often finish that and I’m like I feel so much better.

“I think through Covid everyone has realised they need to prioritise their health more and they have time to do that now, and I think this is one of those things that just helps everybody.”

Like many, Rice set a new year’s resolution of sorts heading into 2022, with the goal of getting back into a healthy fitness routine.

So the partnership with F45 has come at a perfect time.

“My transition out of swimming and being an elite athlete was really challenging but one of the hardest parts was reframing my mind around what normal exercise would be now because for me, normal was seven hours a day of exercise, which obviously isn’t sustainable in normal life when you have other focuses that aren’t just being the best athlete in the world,” Rice said.

“I would go to the gym and feel guilty for only being there for two hours because that’s so much less than what I’ve previously been used to.

“I really just want to focus more on exercise, schedule, having time off and bringing back some of those elite athlete mentalities, which I tried to turn off, if that makes sense – so having a real structure to my workouts, knowing what I’m doing every day and pushing myself through that workout if I did or didn’t want to do it.”

“I do six workouts a week from Monday to Saturday morning and then I have Sunday off. I’m trying to do the same workouts each week on the same days … I think the easiest way to see progress is to stay consistent and track it,” Rice said.

Three x F45 class per week: “I try to do one weight and HIIT (high intensity interval training) combined and then two HIIT sessions”

One-two strength sessions per week: “This is where I can really work on my open shape and strength”

One-two walks per week: “I try to do a hike out at Mount Coot-Tha or somewhere I really get out of the city vibe, no phone, just to get in nature. Then maybe a walk with a friend that’s more casual but a nice time to connect.”