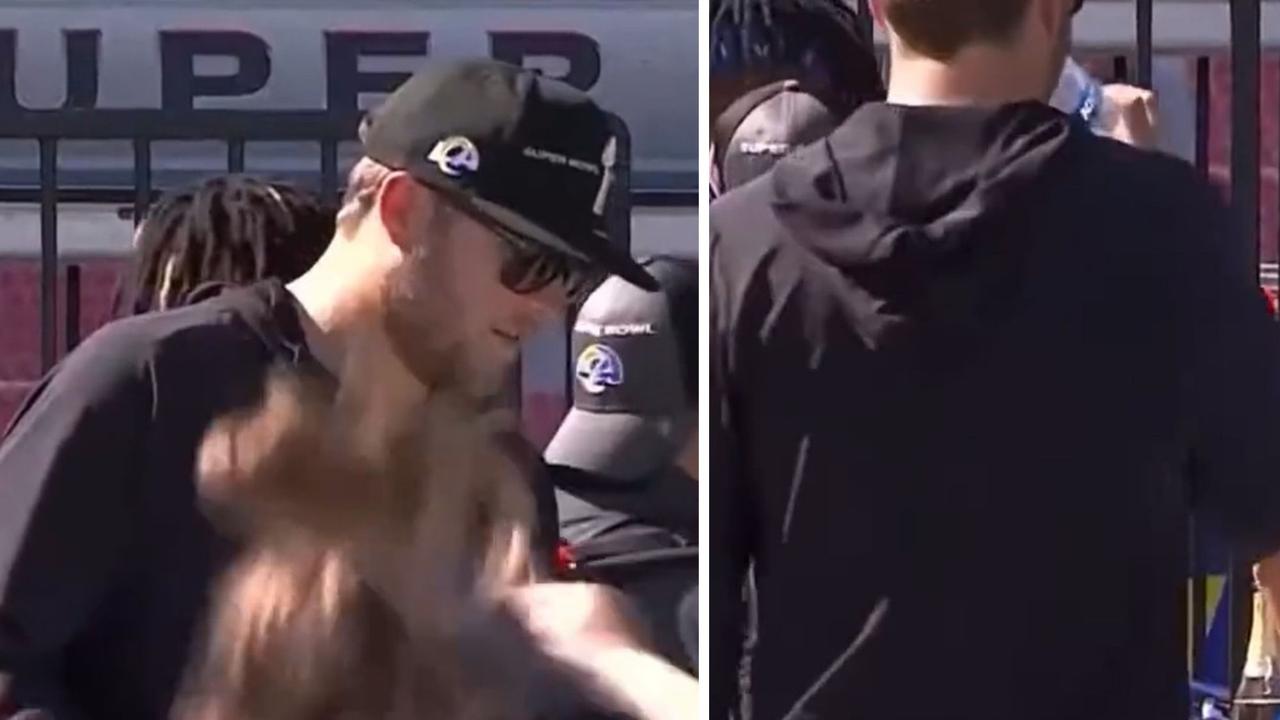 Super Bowl winning QB Matthew Stafford has been slammed for turning away after a photographer was seriously injured during the celebration parade.

The LA Rams have celebrated their Super Bowl triumph hard but a video captured at the event has seen quarterback Matthew Stafford slammed.

Celebrating the franchises’ second Super Bowl and first in LA, the alcohol was flowing for the champions.

But during the celebrations, an NFL photo editor named Kelly Smiley was apparently trying to get a photo of Stafford and his wife Kelly, when she backed off the edge of the stage.

The Stafford’s reacted as Smiley fell, but while Kelly rushed to check on her from the stage, Matthew appeared to say “oh my”, turned away and took a sip of water.

Fox News said the stage “looks to be six feet off the ground”.

While it’s unknown whether Stafford had turned to get some help as the video cut out seconds later.

As for Smiley, she took to Twitter to reveal that she had fallen on both of her cameras and had “fractured my spine”.

The video has since gone viral, with Barstool Sport’s version being viewed over 2.5m times.

SNY anchor Chris Williamson wrote: “When people show you who they are, believe them. Being drunk is not an excuse to not show any concern (I hope he did at some point) for an individual who just fell 8 feet trying to take photos of you and your wife.”

Military reported for the San Diego Union-Tribune Andrew Dyer responded: “This is so scary. Photographer is Daily Aztec alum @kellysmiley23, a great photographer and even better person. In a tweet tonight, she said she’d fractured her spine. People are yucking it up or dunking on Stafford but it’s not funny.”

Radio broadcaster Laura Steele also added: “I’m sorry but this is horrible! A photographer taking a pic of Stafford falls off stage right in front of him & he just walks away? I know he’s a good guy must have been a momentary lapse of reason?”

But while many were critical, others came to Stafford’s defence.

Social and programming manager for The Athletic Ryan Cole said Stafford was clearly too drunk to know what he was doing.

“It’s a 3-second clip during a moment he was blacked out drunk, man. He might have fell off the stage his own self if he peaked over to look. Unfortunate she fell, but spinning this on Stafford is an odd angle to take here. We don’t know what response was had afterwards,” Cole tweeted.

Founder of Downtown Rams Jake Ellenbogen also wrote: “I’m done listening to people criticising Stafford for not helping the girl. I feel awful for her fracturing her spine but if you are going to act like Matthew Stafford’s a bad person now because he reacted an walked away since he was drunk out of his mind idk what to tell you.”

The celebrations were very loose as Stafford swigged from a Don Julio 1942 tequila bottle and defensive star Aaron Donald quaffed beer and champagne as the NFL champions marked Sunday’s victory over the Cincinnati Bengals with an open-top bus tour.

Hordes of fans thronged the route to salute the team in blazing sunshine before a victory rally held in front of the Los Angeles Memorial Coliseum.

Rams star Stafford, who had been chugging beers during the bus tour, addressed the crowd with the tequila bottle in his hand.

“I’m so damn happy to be up here with you guys, celebrating this s***,” he said to the crowd.

“Let’s go y’all. I’m gonna bring a little Southern hospitality to this. I love this so much. You guys have been unbelievable all year. And you know what? We appreciate you.”

NFL legend Tom Brady, who had his own boozy celebrations after leading Tampa Bay to the title last year, gave Stafford some advice tweeting: “Mix in some water Matt … trust me”.

Kelly Stafford later posted on Instagram: “Yeppppp. y’all could have guessed … there was zero water mixed in and ya know what … FINALLY. Y’all get a taste of ‘not so professional’ Matthew”.

“So if I slur my words I apologise,” Donald said. “I dreamed this for so long. we’re world champions. That’s what it’s all about.