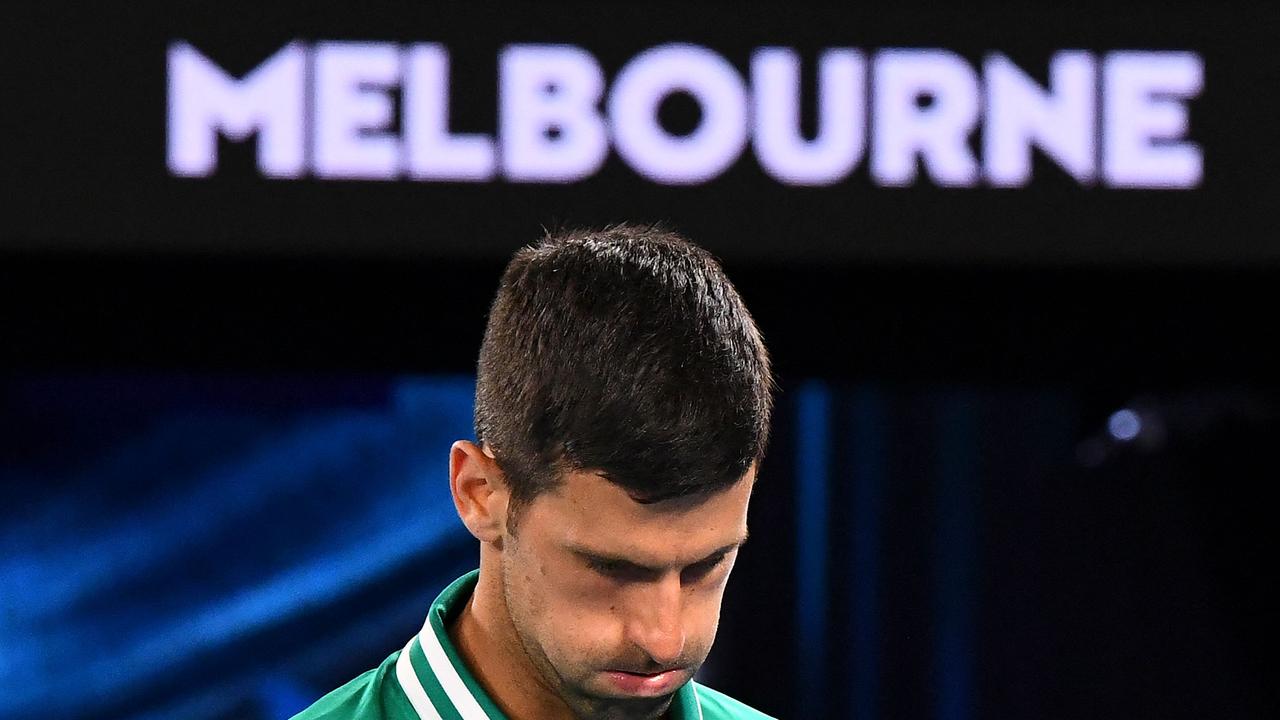 Tennis world No. 1 Novak Djokovic has dropped a grand slam bombshell as his vaccination views once again come to the fore.

Tennis world No. 1 Novak Djokovic has revealed he will be willing to miss out on future tennis trophies, including grand slams, if entry requires him to be vaccinated against Covid-19.

Djokovic landed in a world of controversy when he landed in Melbourne for the Australian Open in January.

The 20-time grand slam champion claimed he had an exemption due having caught Covid in December, but was denied entry, which started an 11-day circus which including Djokovic winning one court case before Immigration Minister Alex Hawke cancelled his visa on the Friday before the start of the Australian Open.

A last gasp attempt to stay in Australia was denied and Djokovic flew out before the Australian Open.

It was a bitter start to the grand slam and saw a diplomatic drama as Serbia fired several barbs at Australia.

In early February, Djokovic promised to go public and in an interview with the BBC, the tennis superstar broke his silence.

He said he has not been vaccinated against Covid-19 but had been vaccinated as a child and said that if his involvement in future tournaments, including grand slams, was contingent on being vaccinated, then “that is the price I’m willing to pay”.

“I understand and support fully the freedom to choose whether you want to get vaccinated or not,” he said. “I have not spoken about this before and I have not disclosed my medical record and my vaccination status because I had the right to keep that private and discrete. But as I see, there is a lot of wrong conclusions and assumptions out there and I think it’s important to speak up about that and justify certain things.

“I was never against vaccination. I understand globally, everyone is trying to put a big effort into handling this virus and seeing an end soon hopefully to this virus. And vaccination was probably the biggest effort that was made, probably half of the planet was vaccinated. And I fully respect that.

“But I’ve always supported the freedom to choose what you put in your body. For me, that is essential. It is really the principle of understanding what is right and what is wrong for you, and me as an elite professional athlete, I have always carefully reviewed, assessed everything that comes in, from supplements, food, the water that I drink, sports drinks, anything that comes into my body as fuel. Based on all the informations I got, I decided not to take the vaccine as of today.”

Djokovic added that he keeps an open mind to the vaccine as the world continues to try to find a solution to Covid because “no one wants to be in this situation that we’ve been in collectively for two years”.

Asked if he was prepared to give up the opportunity to be the best player to pick up a racquet, he replied simply “yes”.

He also confirmed that he’d be willing to miss the French Open, Wimbledon and the US Open all of which may deny him entry.

Currently, Djokovic’s next scheduled tournament is at Indian Wells, which is a vaccinated-only event set to start on March 20.

When asked why, Djokovic explained: “Because the principles of decision making on my body are more important than any title or anything else. I’m trying to be in tune with my body as much as I possibly can.”

Djokovic’s controversial views were blasted as “wildly anti-scientific” and he was labelled an anti-vaxxer.

But the Serbian star said while everyone has the right to say what they think or believe, his beliefs didn’t deserve to be lumped into the anti-vax movement.

“I have never said I’m part of that movement,” Djokovic said. “No one in that entire process of the Australian saga has asked me on my stance or my opinion on vaccination. No one. So I could not really express what I feel and where my stance is, neither in the legal process, neither outside. It’s really unfortunate that there has been this misconceptions and wrong conclusion made around the world based on something I completely disagree with.”

Djokovic also hit back at speculation that his Covid positive in December didn’t add up.

“But no-one is lucky and convenient of getting Covid. Millions of people have and are still struggling with Covid around the world. So I take this very seriously, I really don’t like someone thinking I’ve misused something or in my own favour, in order to, you know, get a positive PCR test and eventually go to Australia.”