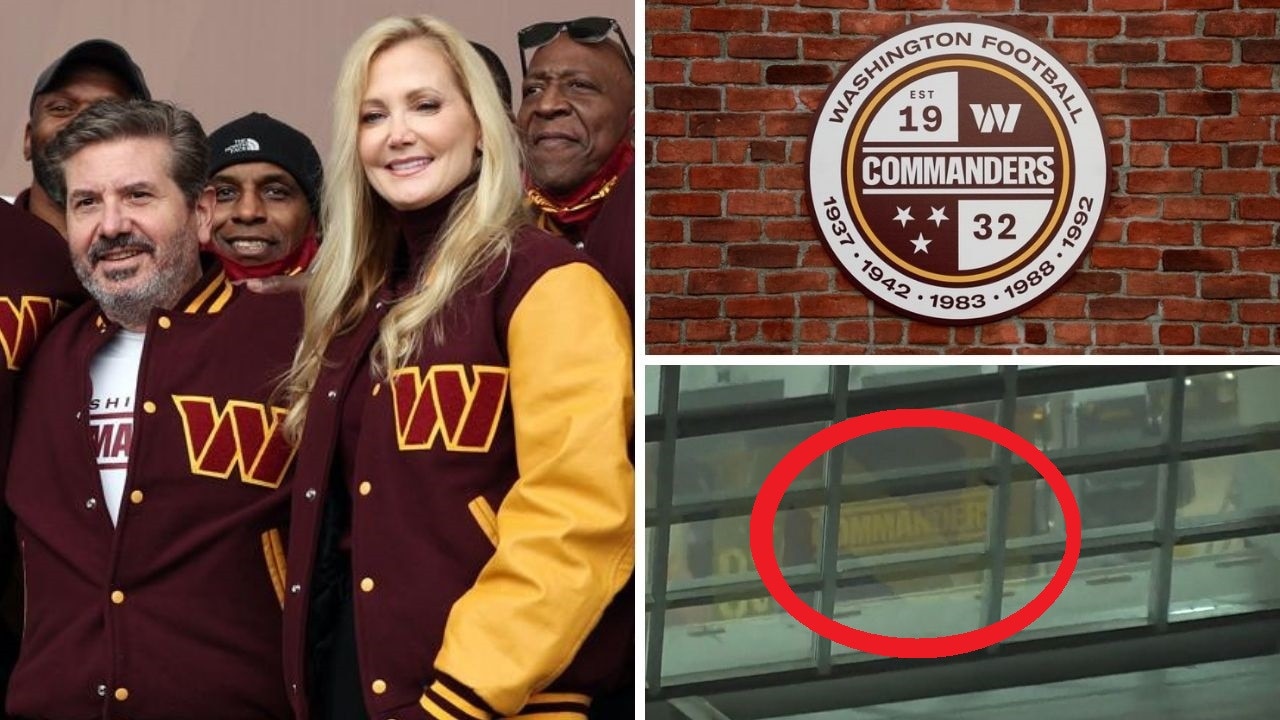 An NFL team was always going to cop some blowback for its major rebranding but a leaked photo before the big reveal ruined the surprise.

Commanders will be the new name of the NFL’s Washington Football Team, the club announced, completing a name change after dropping the controversial “Redskins” in 2020 over racist connotations.

The reveal was made at FedEx Field, the team’s home stadium, before a national television audience on NBC’s Today show.

The move comes 20 months after the club “retired” the name Redskins after sponsors began pressuring the team to make a change. It opted for Washington Football Team for the past two seasons while a decision on a new name was considered.

“It’s something we believe embodies the values of service and leadership that really define … this community.

“It’s something that can allow us to tie the history and the rich championship legacy of this franchise to new traditions in the future.”

While Washington announced the rebranding on Thursday, the cat was let out of the bag the day before the big reveal when a news helicopter zoomed in on “Commanders” signs inside the team’s home stadium.

Unsurprisingly, as with any controversial name change, the jokes came think and fast at Washington’s expense.

Jared Keller said: “The Washington Commanders is the *perfect* name for a football team with a history of screwing up.”

Author Shea Serrano added: “Washington Commanders is like when the movie can’t get the rights to use an actual team so they throw something quick out there and hope it just doesn’t cause too much confusion.”

The team, founded in 1932 as the Boston Braves, changed its name to Redskins the following year and moved to the US capital in 1937.

Criticism grew from fans and Native American communities but team owner Dan Snyder vowed he would keep the name and the team symbol of a side view of a Native American warrior’s face.

In 2020, following protests after the murder of George Floyd, team and NFL sponsors threatened to remove their backing if the team didn’t drop Redskins as the name. Some stores began removing Redskins merchandise.

The team announced it would conduct a review of the name and in July 2020 announced it would “retire” Redskins for the generic Washington Football Team, keeping its colours of burgundy and gold while setting the stage for the Commanders.

“I loved it,” Washington captain Jonathan Allen said. “We’re excited about it and we’re going to go forward with it. We’re excited about the future.” The team logo will be a stylised “W” similar to what was used the past two years.

“As an organisation, we are excited to rally and rise together as one under our new identity while paying homage to our local roots and what it means to represent the nation’s capital,” Snyder said in a statement.

“As we kick-off our 90th season, it’s important for our organisation and fans to pay tribute to our past traditions, history, legacy and the greats that came before us.

“Today may mark the first day for the Washington Commanders, but we are and always will be Washington.”

Former Washington star quarterback Joe Theismann said the name will grow on supporters, adding, “the more you hear it, the more you see it, the more enthusiastic you will become”. As the Redskins, the club won the NFL title in 1937 and 1942 and captured Super Bowl crowns for the 1982, 1987 and 1991 seasons.

The Washington Football Team went 7-9 in 2020 but won a division crown and reached the playoffs, losing to Tom Brady and the eventual Super Bowl champion Tampa Bay Buccaneers. It went 7-10 in the 2021 campaign that ended last month. Washington fans haven’t enjoyed a winning campaign since 2016.

“It really is about renaming the team but I also think it’s about turning the page to a new chapter,” Washington coach Ron Rivera said.

The Washington change was not the only recent one in American sport regarding Native American names.

Major-league Baseball’s Cleveland Indians changed their name to the Cleveland Guardians after the 2021 season. The club had earlier dropped its “Chief Wahoo” logo, a Native American with a grinning face.