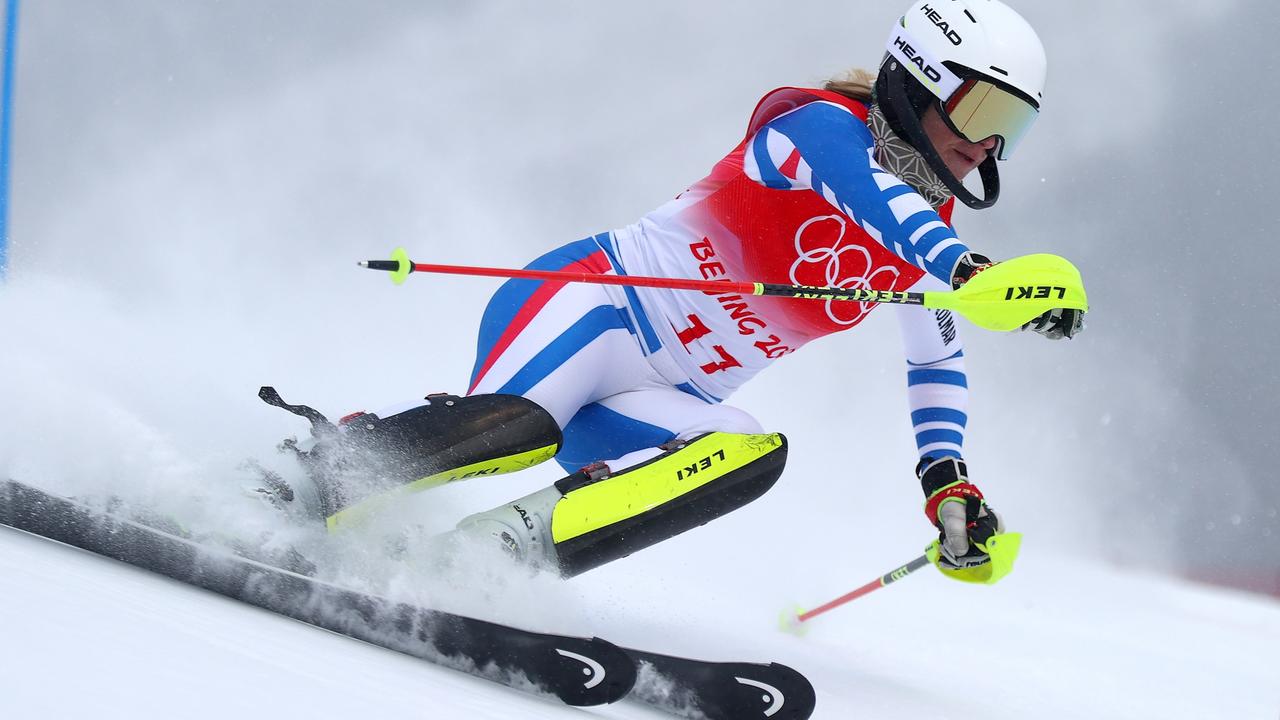 A bizarre Beijing press conference has descended downhill quicker than slalom skiers, with the great firewall of internet censorship appearing to firmly entrenched at the Winter Olympics.

An extraordinary press conference at the Beijing Games has provided more twists and turns than the aerials skiers on topics ranging from Peng Shuai to Covid.

Proceedings opened with a Chinese Olympic Games volunteer professing to having no knowledge of tennis player Peng Shaui.

The official Beijing Olympics spokesperson Yan Jiarong has also angrily defended the country’s One China policy and Chinese medical experts claimed their extraordinarily draconian counter-measures have been so effective they have wiped out Covid-19.

It was also revealed that a Kyodo journalist from Japan was physically prevented from asking a question of a Hong Kong athlete in the mixed zone area after their competition.

Wei Yining, a volunteer for Beijing Olympics was at the press conference to talk about her pride in helping put on the Games.

She was asked if she knew of Shaui or her post on Weibo — where she claimed to have been sexually assaulted by a senior Chinese leader.

The issue has dominated western media, including Peng meeting with the IOC president Thomas Bach, but inside of China, behind the great firewall of internet censorship there is no knowledge of the matter.

Wei said in response to the question: “I am sorry I don’t really know that”.

Wei is one of the Games thousands of “volunteers” hand picked for their allegiance to the party and aspirations for higher office.

Remarkably, while there were hundreds of Covid infections within the closed loop of the Olympic venues, not one volunteer was infected, Beijing officials said.

After recording constant infections of around 30 to 50 a day inside the Olympic closed loop, including the Athletes Village, officials said on Thursday there are now no fresh cases.

Indeed, the Beijing official in charge of Covid prevention Chun Huang claimed the countermeasures have been so effective that as well as being no Covid in the closed loop at present, there have also been no breaches from the Olympic closed loop into the general society of China.

He said: “the successful implementation of the counter measures is a successful model for the Olympic Games and for future pandemic control in Beijing, it is a good reference. It will help us in the future.”

Nearly 500 Olympic participants were Covid-positive, many at the airport with historic remnants of the virus, and they were isolated in special purpose facilities for several weeks. The counter measures involved strict adherence to a mask wearing policy, with teams of “mask police” patrolling venues to ensure enforcement, social distancing, and daily pcr tests, including checking in and out of hotels each morning to obtain up-to-date Covid status.

Meanwhile, the BOCOG spokesman Yan interrupted the conference several times to deny that China is involved in forced labour camps in Xinjiang, and that Taiwan, called Chinese Taipei under Olympic rules, is not part of China.

Yan said: “I want to make a supplementary remarks. We take a solemn position, what I want to say is there is only one China in the world, Taiwan is an undividable part of China, it is a well-recognized international principle, we are always against the idea of politicising the Olympic Games”.

Then when a reporter asked about the provenance of materials in the Games uniforms and merchandise and whether some of the materials had come from Xinjiang using labour from Uighers, Yan replied: “These are lies from relevant groups, we are against the politicising of sports, thank you”.

Kamila Valieva skated to ​​Kirill Richter’s “In Memoriam” during her controversial short program run, but the silence throughout her performance was deafening.

The 15-year-old Russian figure skater, who was ruled eligible for the 2022 Olympics women’s singles competition after a positive drug test surfaced last week, finished first in the short program with a score of 82.16. Many — including her opponents and their teams — have criticised the decision, made by the Court of Arbitration for Sport, to let her continue to compete as a full investigation into her positive test unfolds.

NBC’s figure skating broadcast team, comprised of former American Olympic skaters Johnny Weir and Tara Lipinski, was no different. Seemingly in protest of Valieva’s participation, the broadcast was nearly silent while Valieva was on the ice, only offering a couple of comments on her performance.

“All I feel I can say is that was the short program of Kamila Valieva at the Olympics,” Weir said bluntly as Valieva bowed to the audience.

“She had a positive test. We should not have seen this skate,” Lipinski added.

In the lead-up and aftermath of Valieva’s performance, however, Weir and Lipinski were vocal about their displeasure with Valieva’s ruling.

Weir, who competed in two Olympics, apologised that Valieva’s doping scandal was “overshadowing your Olympics.” He previously said the controversy made him uncomfortable announcing the competition, calling it a “slap in the face to every other skater in this event.”

“With all of this news I just, I feel so uncomfortable as a skater and as a skating fan even having to commentate her performance simply because she should not be able to compete in this competition,” Weir said.

“That was the hardest event that I’ve ever had to cover,” Weir said in a video he posted on Twitter after the short program concluded. “And I want to thank you all for supporting the skaters that should be in this competition, whose life work is on the line. Thank you.”

Lipinski, who at 15 — the same age as Valieva — became the youngest figure skater to win a gold medal in 1998, suggested Valieva’s participation tarnished the rest of the competition.“It’s not just about her skating or not skating,” Lipinski said. “It’s affecting everyone at these Olympic Games to think that there is going to be no medal ceremony in the ladies event if she’s on the podium. It’s otherworldly to me. I can’t even comprehend that. Imagine how that’s affecting so many other skaters’ lives and their Olympic experiences.

“It makes you question everything. These skaters give up their lives for this moment, to get to this place. Why?”

Valieva’s first-place finish qualified her for the free skate on Thursday, where she looks to build on today’s dominant performance to capture her second gold medal of the 2022 Olympics.

In the likely scenario she does take home a medal, however, there will be no medal ceremony: The official recognition will be postponed until a full investigation yields its findings.

– This article originally appeared in the New York Post

WHY SILENCE IS GOLDEN AT SCARY GAMES

Outspoken British Olympian Gus Kenworthy said Wednesday that he is biting his tongue while in Beijing because of the “very real risks” of criticising hosts China.

Kenworthy, a silver medallist at the 2014 Sochi Olympics, spoke out earlier this month against the decision to award the Winter Games to China because of the country’s “appalling” human rights record.

He told the BBC that “by actually taking a stance against them in a real tangible way you could probably make some positive change”.

But the 30-year-old freestyle skier has toned down his criticism since arriving in Beijing, telling AFP that he is “trying to just get through the Games safe and sound”.

China warned ahead of the Games about athletes criticising the authorities while in the country.

“We are at the mercy of China right now,” said Kenworthy, who competed for the United States at two Winter Games before switching allegiance to Britain in late 2019.

“I just feel like there are very real risks of speaking right now,” he added. Kenworthy said “no one has censored” him but he has “been encouraged to tread lightly”, adding that he can “totally understand why”.

But he intends to pick up where he left off when he returns home. “I don’t think I would want to be ruffling feathers in this exact moment anyway because I have to perform and I have to focus, so I’m just trying to do that and get through the Games,” he said.

“I think I can have a much bigger impact speaking up after the Games if I’ve just had a medal than if I don’t.”

Kenworthy said it was “important for athletes to use their platform” and he has been outspoken on various issues in the past, including climate change and LGBTQ rights.

Kenworthy came out as gay after competing at the Sochi Olympics and he said the atmosphere at that year’s Games was “not welcoming” for LGBTQ people.

“We went through all sorts of media training with the US team on how to answer certain questions and they really didn’t want us to speak on that,” he said.

“I think that countries that participate in the Games or host the Games need to make sure that those athletes are supported and safe and that no minority group is being excluded or persecuted.” Kenworthy, who was born in England but moved to the US aged two, is now competing for Britain and said he “has had truly the best time being part of Team GB”.

He will compete in the freeski halfpipe in Beijing, beginning with Thursday’s qualification round.

“If I land my run I think I will do well, but it’s a judged sport so there’s really no saying,” he said.

“Ultimately it will come down to what I do and what other people do and how well they are executed.”