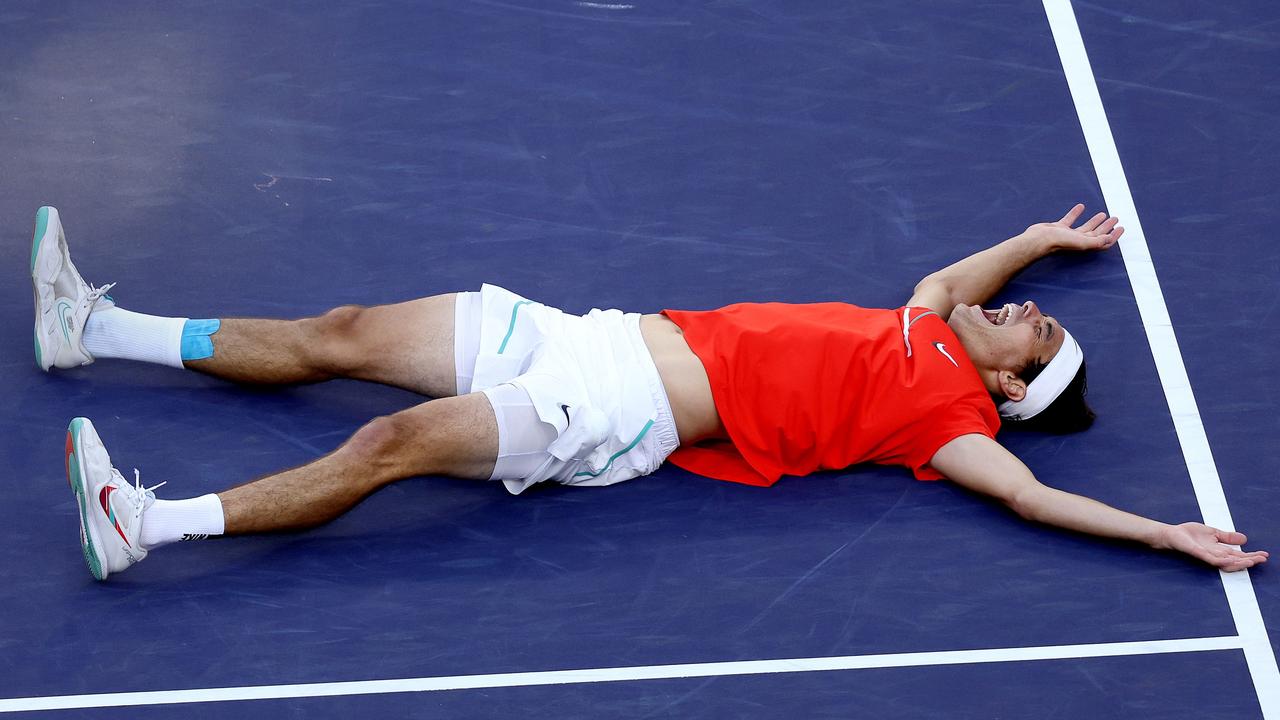 World No. 20 Fritz collapsed to the ground in disbelief after claiming the final point in a second set tiebreak to wrap up his 6-3 7-6 (7-5) victory — giving him his first ever Masters 1000 final.

“I’m going to have to hold back tears in every single interview I do, every single on-court speech, this is gonna be tough because I’m such a happy crier,” Fritz said.

“This is just one of those childhood dreams you never even think will come true.”

Nadal looked well before his best to start proceedings, losing the first four games of the match before finally getting on the board.

He showed some ominous signs as he worked his way back into the contest in the second set but Fritz held firm and showed tremendous composure to stay on course.

After beating teenage countryman Carlos Alcaraz in the semi-finals, Nadal improved to 20-0 in 2022. But Fritz put an end to that incredible winning streak for the biggest victory of his career.

Making his result even more remarkable, Fritz suffered a terrible ankle injury before the decider, forced to cut his warm-up short.

The American said he was screaming in agony when he went down on the practice court. All his coaches reportedly told him to pull out of the clash but Fritz pushed through the pain barrier on his way to the trophy.

“It’s ridiculous how I could play today. I’ve never experienced this much pain in my life,” he said.

The 35-year-old Nadal was also pushing himself through pain, twice receiving treatment on his upper body during the match.

Nadal had already said he would skip next week’s Miami Masters to give his body a rest and prepare for the clay court season.

After fearing a foot injury that halted his 2021 campaign might end his career, the Spaniard claimed a record-setting 21st Grand Slam singles title with an epic comeback victory over Daniil Medvedev in the Australian Open final, then won the title at Acapulco.

Battling to the end in the Californian desert, he saved one match point in the 10th game of the second set, but in a tense tiebreaker that decided it all Fritz proved too much.

After Nadal spun a forehand wide to give up another match point, Fritz put it away with yet another of his big forehand winners.

Fritz’s fitness concerns were at the forefront when the American fell on the very first point of the match. But otherwise he showed no ill-effects as he broke Nadal twice to race to a 4-0 led in the opening set in 19 minutes.

Nadal, coming off a draining three-set semi-final victory over 18-year-old compatriot Carlos Alcaraz, looked sluggish, but he appeared to have found his range when he held at love to make it 4-1.

But he was unable to make any inroads on Fritz’s serve until the American served for the set at 5-2 and Nadal converted his only break chance of the set when Fritz sent a forehand long.

However, the Spaniard was unable to build any momentum, immediately surrendering the break and the set after 39 minutes.

Nadal, who had a quick adjustment from the trainer on court against Alcaraz to address discomfort around the left side of his chest, took a medical time-out and left the court indicating the same area to the trainer.

But it was the world No. 4 who gained the upper hand in the second set with a break for 2-1, Fritz giving him a first chance with an ill-timed double fault, coming up with a big serve then falling to a forehand winner from Nadal.

But the American broke back immediately and saved four break points in the next game and they went with serve to the tiebreaker.