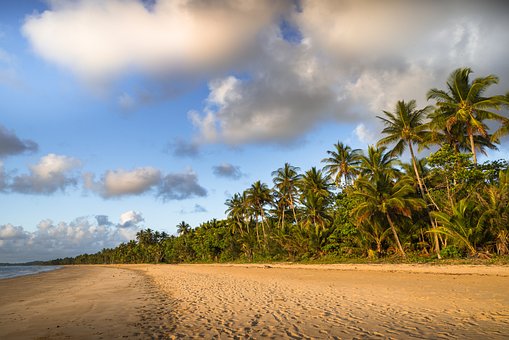 Today the people of Queensland enjoy a very healthy economy, thanks to a variety of profitable industries. Farming is big business in Queensland. Some of the locally grown items are sugar cane, pineapples, peanuts, and bananas. Animals are a part of that industry, too – with products like wool and beef being harvested as well. Another primary industry in Queensland is tourism. Millions of people descend upon the state each year, generating over 4 billion dollars in revenue annually. Because of its sheer size, Queensland has a lot to offer tourists in varying climates and landscapes, but it also has many exciting places to visit and sights to see. We’re going to highlight some of the best places to visit when in Queensland and see why millions of guests visit every year.

The Great Barrier Reef is the most extensive coral reef system globally – and it’s located just off Queensland’s coast. Snorkelers and divers worldwide travel to Queensland to tour these precious reefs in its midst. In all, there are nearly 3,000 reefs and 900 islands to explore. The Great Barrier Reef has been named one of the seven wonders of the world, and it has also been designated as a UNESCO World Heritage Site. Tourism to the reefs alone generates more than 1 billion dollars to the local economy each year.

The Daintree Rainforest is the biggest continuous rainforest in Australia. Its 2,600 square kilometer forest contains 30% of Australia’s reptile species and 65% of its bat and butterfly species.

The rainforest is home to some 12,000 species of insects and many different species of rare flora.

Gold Coast City is a tourist mecca that draws millions each year. The city is world-renowned for its 35 miles of beaches, which offer some of the world’s best surfing waters. The town boasts 500 restaurants, 40 golf courses, and six theme parks. It’s also a notable film producing city, with 75% of all movie productions in Queensland in the city since the 1990s. The Q1 building is located in Gold Coast City and is the highest residential tower in the world. On 77 floors, there is a public observation deck, which happens to be the highest in all of the Southern Hemisphere. Visit Southwest Airlines Reservations and get best vacation packages with cheap flight fares.

The Whitsunday Islands are a tiny chain of 74 islands off the coast of Queensland. Only eight of them are inhabited, and most of the rest are national parks.

You’re free to choose your adventure, but one of the most popular activities in the islands is chartering a boat and crew for an overnight excursion to explore them all. There are even elopement packages Whitsundays as it’s a popular wedding destination because of its natural beauty.

Hervey Bay is world-renowned for its whales. Whale watching is a favorite activity for locals and tourists alike, so if that’s something you’d like to experience – Hervey Bay is the place to go.

The St. Helena Ghost Tour in Brisbane is a haunted nighttime boat tour put on by costumed characters and guides. The cruise lasts forty minutes, during which you will be spooked by tales, voices, and visions from the past. In the end, you’ll be served tea and desserts! Suitable for all ages of tourists, but small children may get frightened.

Queensland is home to six theme parks, and all of them are located in the Gold Coast City. Whatever your preference for adventure, you’re sure to find it there. There are two waterparks, a safari adventure park, and other traditional Disney/Warner Brother types.

At Barron Falls, you can also choose your adventure. You can climb to the top of the observatory and watch the gushing waterfalls from a high vantage point with spectacular views, or you can get right in the middle of the white water rapids they produce by going on a rafting excursion down the Barron River.

Australia is famous for its crocodiles, and at the Johnstone River Crocodile Farm, you can get up close and personal with over three thousand of them ranging in size from 30cm to over 5 meters in length.

The Currumbin Wildlife Sanctuary combines all the fantastic natural attractions Australia offers and presents them to you in one package. More than 1,400 animals and birds are at home on the sanctuary, along with the most extensive collection of Australian flora in the world. There are many live shows and presentations – including one about some of the most poisonous snakes globally, a favorite visitor to the sanctuary. There is also an animal rehabilitation program on site that rehabilitates sick and injured wildlife.

The Riversleigh area of Queensland is one of the ten best fossil depositories in the world.

Some rare species of fossils have been found around this area—even some 35 varieties of bats and complete dinosaur skeletons. Most of the remains were found encased in limestone. The fossils date between 15 and 65 million years and have provided valuable scientific evidence of the evolution of some native Australian species such as the koala.

The Skyrail is a 7.5-kilometer cableway that carries passengers via suspended gondolas through the rainforest of Queensland. The view is unsurpassed by any other in Australia and is the number one tourist attraction in the state. There are 114 gondolas capable of carrying six passengers each. The rides take about two hours, with two stops at outposts in the rainforest, where guests can disembark if they’d like and explore the rainforest via trails and walkways. The gondolas move very slowly, giving the visitors ample time to enjoy their surroundings. The Skyrail is accessible to passengers of all ages and abilities.

The Ginger Factory in Queensland is the largest of its kind. Ginger is processed into many different types of products, and a tour of this factory will show you how. It’s a great place for kids because over 200 puppets put on performances and a fun train ride. There are cooking displays that show you how to incorporate ginger into your meals, a gift shop, an ice cream parlor, a restaurant, and lots of other fun and educational activities and areas of interest.

1. Saltwater crocodiles are abundant in the waters of Queensland, and the threat they post to humans should not be overlooked. Be extra cautious around inland waterways and some of the coast areas away from The Great Barrier Reefs. Crocodile attacks are not that common but have been known to happen and can be frequent during certain times of the year.

2. Sunstroke is a significant health concern in Australia. Be sure to keep you and your travel party well hydrated by drinking lots of waters while venturing outdoors during the day time hours. The sun’s harmful rays’ UV index will usually be on the ‘extreme’ end each day in Queensland. The hottest time of the day is between 10a and 2 pm, so avoid being outdoors during those hours, if possible.

3. Aside from only swimming in patrolled waters with lifeguards and marked safe swim areas, pay close attention to signs on the beach regarding ‘stingers.’ These animals thrive in Australian waters, and their stings can be deadly.

What Is HubSpot Integration, And Why Do Businesses Need It?

If you are a business owner, you know that there's much work to keep your company running smoothly. From marketing to sales to customer service, it can...
Read more
Business

What you need to know about the value of an excavator?

If you're interested in buying a used excavator, there are some important factors to consider. These factors include Worksite conditions, Hydraulic system, and size....
Read more
Business

DIFFERENCE BETWEEN ANTIVIRUS AND ANTIMALWARE, ITS DETAIL