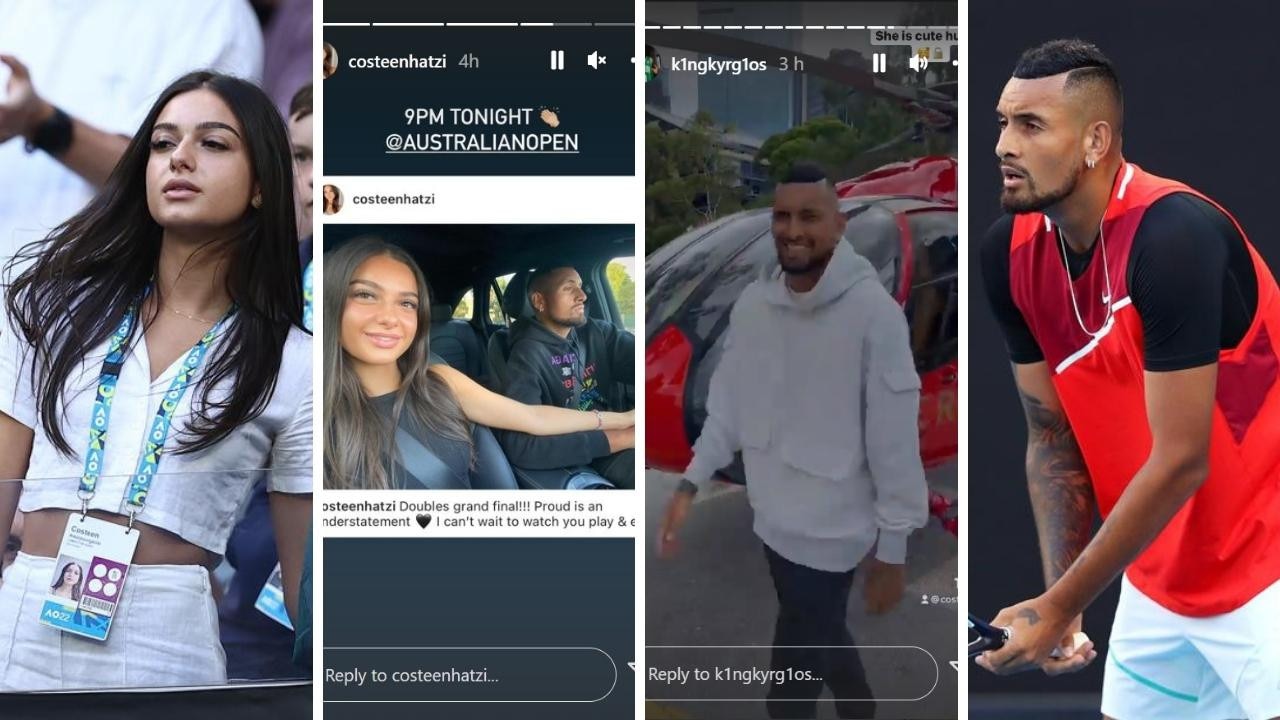 Nick Kyrgios, Thanasi Kokkinakis, Max Purcell and Matt Ebden have already made history in setting up the first all-Australian men’s doubles final in 42 years — now it gets serious.

There can be only one winner in the dream final, which only commenced after 10.15pm (AEDT) following the wild scenes of the women’s singles final, won by Ash Barty.

Kyrgios and Kokkinakis have sparked frenzied scenes never witnessed before at Melbourne Park on their way to the final, but it has been a very different crowd against their fellow Australians.

The wild crowd atmosphere was roared back to life when the Special Ks took the first set 7-5.

Thanasi Kokkinakis and Nick Kyrgios are one set away from becoming Australian Open men’s doubles champions after capturing the opening set against Matthew Ebden and Max Purcell.

In a tight first set, the critical moment came with Ebden’s serve broken at 5-5.

In the blink of an eye, Kyrgios and Kokkinakis wrapped up the first set 7-5 after 50 minutes.

Nick Kyrgios has posted photos and videos of him hopping into a helicopter with girlfriend Costeen Hatzi the day before the men’s doubles final.

Photos posted to Hatzi’s Instagram stories showed the loved-up pair flew to a ritzy retreat for a meal in a unique preparation for the blockbuster doubles final.

The pair also exchanged some cute messages on Instagram just hours before the 26-year-old walks onto court.

Hatzi posted a photo of her holding hands with Kyrgios while driving in a car together.

She captioned the photo: Doubles grand final!!! Proud is an understatement. I can’t wait to watch you play & entertain the whole world. Let’s go boys”.

Kyrgios responded by reposting the image on his Instagram stories with a caption: “My babe, best support”.

The Special Ks have drawn huge crowds with electric atmospheres — though some think fans have crossed the line with their rowdy conduct at times. Vanquished Kiwi star Michael Venus called Kyrgios an “absolute knob” after losing in the quarter-finals while the Canberra product revealed last weekend after beating top seeds Nikola Mektic and Mate Pavic in the second round, a member of the Croatians’ entourage tried to fight him.

Kyrgios and Kokkinakis, who were granted a wildcard entry into the doubles draw at Melbourne Park, continued their giant-killing run on Thursday by defeating third seeds Horacio Zeballos and Marcel Granollers in straight sets in the semis.

By contrast, Ebden and Purcell have gone about their business in much more understated fashion, playing in front of far less fans but still upsetting more fancied opponents en route to the final.

Comments made on Instagram from Purcell’s verified account took aim at the Special Ks’ behaviour at the year’s first grand slam. The comments were made on a video post from the official Australian Open social media account, featuring Kyrgios and Kokkinakis in a press conference talking about the importance of entertaining fans and helping grow the sport by putting on a show.

One Instagram user criticised Kyrgios in the comments section, taking a dig at “dirty” players and saying he should have been disqualified for accidentally hitting a young boy in the crowd with a ball.

“All I’m saying is the way those boys are acting is extremely disrespectful to their opponents.

“How am I not respecting the tournament? I’m playing with good sportsmanship and having a good time. Not having the crowd yell profanity at my opponents and purposely distracting them in-between points?”

Speaking ahead of Saturday night’s final against Kyrgios and Kokkinakis, Ebden said: “The pressure is on them for sure. They’ve had pressure on them their whole lives.

“They love the show and all that. We know exactly what they can do. We respect how they can play.

“We have to find out way to counter that, do what we do.”

Kyrgios hasn’t apologised for anything during the Australian Open and after his and Kokkinakis’ semi-final win, doubled down on his commitment to entertain.

“My goal is to only bring new fans that may not be following tennis to watch tennis. If they flick on a match and they have Thanasi and I playing in an entertaining doubles match, they know nothing about tennis, if they watch that match just then, they probably would tune in next time.

“That’s what I’m about. That’s what I want to bring. I think that’s how the sport is going to survive.”

The 26-year-old didn’t have much time for Venus either, when asked if he had a response to the Kiwi’s “knob” sledge.

“I’m not going to destroy Michael Venus during this press conference, but Zeballos and Granollers are singles players. They’ve had great careers. I respect them a lot more than I respect Michael Venus,” Kyrgios said.

“I think the balance was there today. I think the quality of tennis was amazing and I think the festival atmosphere was still there.

“I think they embraced it, they knew it was an incredible atmosphere. Zeballos took a selfie with us before we walked out, that’s how you embrace an atmosphere. Do you know what I mean?

“You’re not losing a match and then getting salty about it afterwards. It’s ridiculous.”