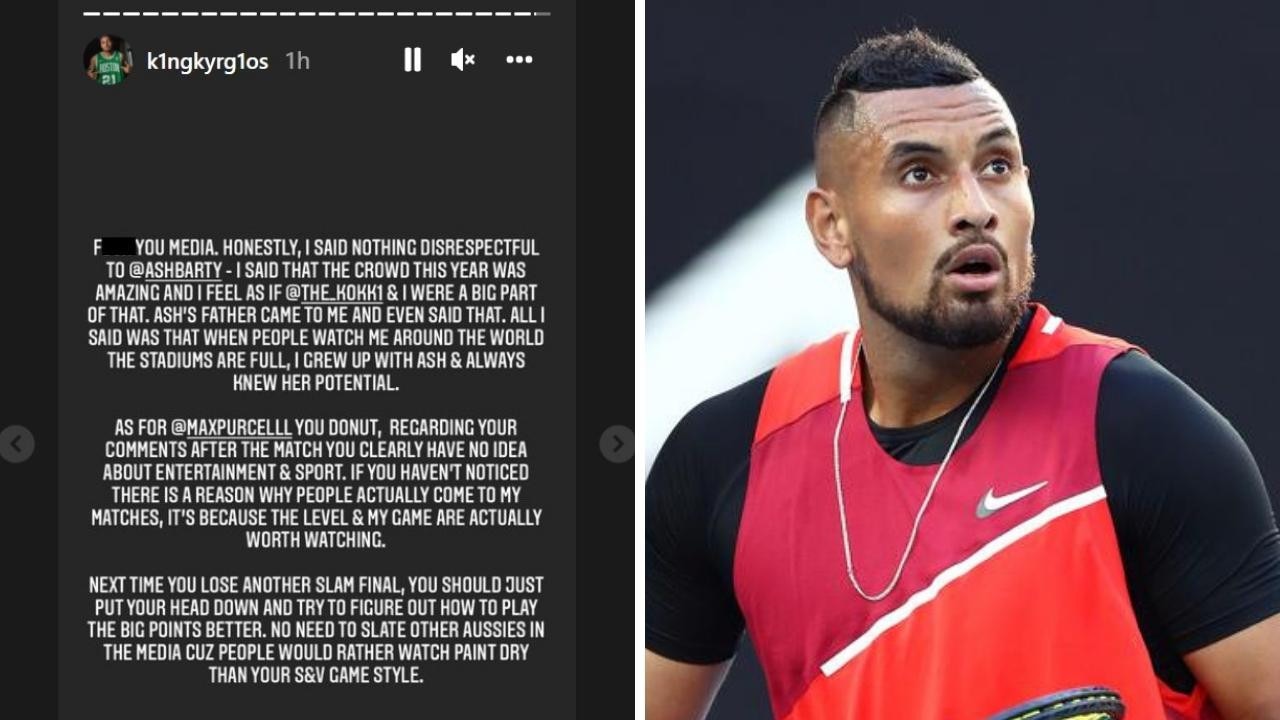 Nick Kyrgios has taken to Instagram to take a swipe at the “media” and Australian Open rival Max Purcell.

The 26-year-old came under fire on Sunday for an apparent slight on Ash Barty with some commentators believing he made an “extremely disrespectful” remark.

When asked about the atmosphere his matches have generated this tournament, Kyrgios — without being prompted — appeared to suggest his match generated more interest and higher TV ratings than Barty did in the women’s singles final.

Kyrgios has been celebrating his incredible Australian Open men’s doubles championship victory with Thanasi Kokkinakis, but he responded to the swirling criticism just after midnight in the early hours of Monday morning.

However, he was just as scathing of the press.

“F** you media,” he wrote on his Instagram stories.

“Honestly, I said nothing disrespectful to @ashbarty I said that the crowd this year was amazing and I feel as if @the-kokk1 & I were a big part of that. Ash’s father came to me and even said that. All I said was that when people watch me around the world the stadiums are full. I grew up with Ash & always knew her potential.”

His anger then turned towards Purcell after the pair had exchanged some prickly words through the media throughout the tournament.

Purcell earlier in the tournament appeared to write on Instagram that he “couldn’t agree more” to a comment that called for Kyrgios to be disqualified for hitting a ball into the crowd, striking a nine-year-old boy.

Purcell praised Kyrgios in his post-match press conference following the final, but also said: “I think it was great for ticket sales here but I’m not so sure how it was taken overseas.

“If you’re watching some of Nick and Thanasi’s matches earlier in the week and you’re overseas, maybe you get turned off tennis a little bit.”

“As for @maxpurcell you donut, regarding your comments after the match, you clearly have no idea about entertainment and sport,” he wrote.

“If you haven’t noticed there is a reason why people actually come to my matches. It’s because the level & my game are actually worth watching.

“Next time you lose another slam final, you should just put your head down and try to figure out how to play the big points better. No need to slate other Aussies in the media cuz people would rather watch paint dry than your S&V game style.”

Kyrgios’ earlier comments about Barty were the bigger storm on Sunday.

“I would say that we’ve created probably the best atmosphere this tournament has ever seen,” Kyrgios told reporters on Saturday night after the doubles final.

“Ash (Barty’s) father came to us and said the crowd was the best he’s ever seen. Obviously Ash is a hell of a player, but I think the ratings speak for themselves.

“The ratings speak for themselves. People watch my matches, everywhere I play around the world the stadiums are full for that reason.

“So I don’t think those people that are screaming out before points, that’s got nothing to do with us.

“But there’s a reason why the ratings are the way they are and people are glued to the TV when we play. It speaks for itself really.”

The comment was received with a scathing backlash from some tennis commentators.

“My jaw dropped when I read those quotes and I thought it might have been one of those where the quote is written down and it looks a bit worse than when you see the clip, sometimes that can be the case with press conferences.

“But it’s not the case in this instance. I mean, on a night that was about Ash Barty, without question, to say that, it is pretty extraordinary.”

Offsiders host Kelly Underwood said it was “extremely disrespectful” and called on Kyrgios to read the room.

It comes as a report revealed Barty’s match was the most watched women’s final since the current ratings system began keeping records in 1999.

Nine Newspapers reports Barty’s match had a record peak audience of 4.2 million. The report details Kyrgios’ match (at the later and less TV-friendly timeslot) attracted a peak audience of 3.1 million — a record for a men’s doubles final.