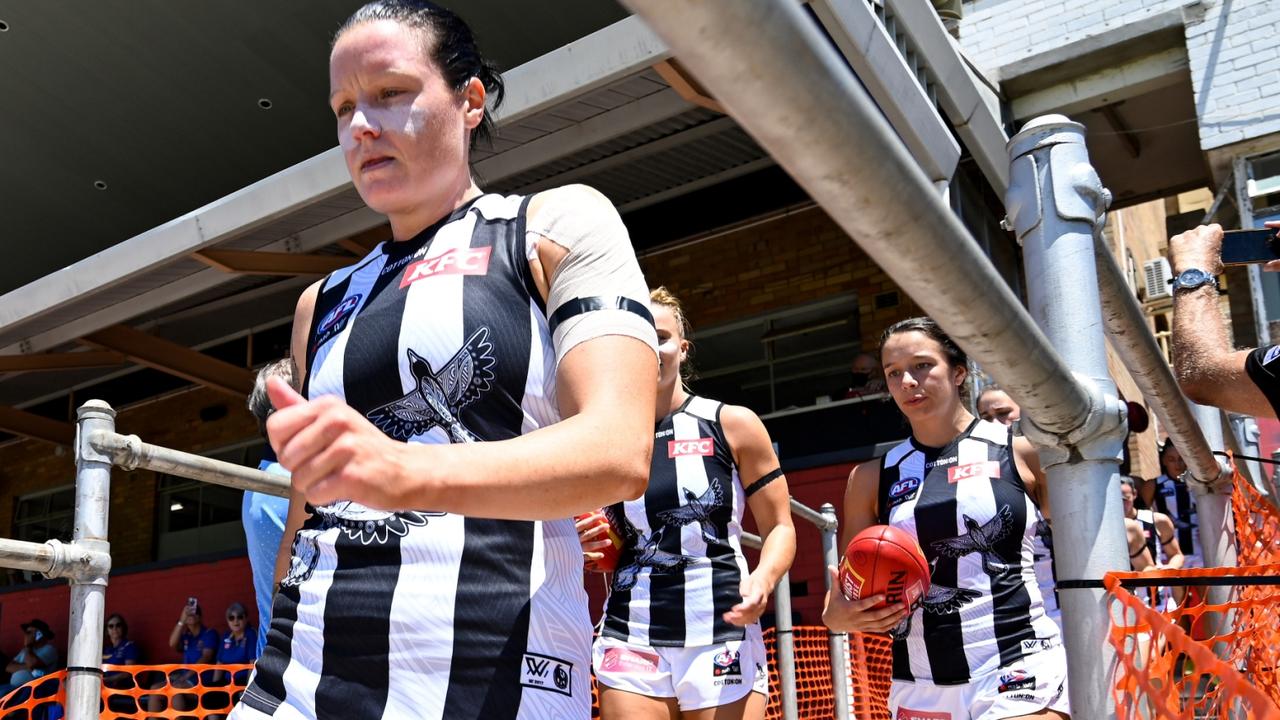 Visiting AFLW players in Perth can expect far superior conditions in the away changerooms. A far cry from the toilet fiasco and unacceptable stifling changeroom heat experienced last weekend.

Match-day conditions are set to be improved for AFL Women’s players after sub-par changeroom and bathroom facilities at a Perth ground were laid bare.

The Herald Sun revealed this week that Collingwood’s clash at Mineral Resources Park at Lathlain saw emergency players forced to stay inside stifling changerooms with no lights or cooling during the game due to strict local Covid quarantine requirements.

Magpies players and staff — of which there was almost 50 people — had also been forced to share just one toilet between them at the ground last Sunday.

But things are set to change from this weekend onwards.

The AFL — which is bound by WA Police guidelines — has sought to improve conditions at the Perth ground where Richmond will take on West Coast on Saturday.

Richmond will travel to Perth on Friday and will live in a strict quarantine bubble.

The Herald Sun understands that the league has added more toilets to the quarantine zone, and strong industrial fans will be installed in the away team changerooms at Mineral Resources Park.

Arrangements have also been made for where travelling emergencies who do not end up playing will be located on match day after two Pies were left in the changerooms last Sunday.

The move comes after the AFL Players’ Association canvassed Collingwood players about the oppressive conditions on Tuesday and relayed their concerns to the league that basic standards were not being met.

The league, which has worked closely with WA authorities to be permitted to play despite strict border rules, said the issues had been addressed.

“The health and safety of everyone in our game and the wider communities remains our highest priority, with all matches anchored in the advice of relevant heath officials,” it said in a statement.

“The AFL reviews arrangements for all matches on a week-to-week basis and issues identified as part of Round 6 have been worked through together with key stakeholders and improved.”

Collingwood star Chloe Molloy described last week’s conditions in WA as “unique” and that “if you walked into what we did to try and prepare for a game, you probably wouldn’t call it AFLW standard change room”.

“It’s definitely down the other end of the list of change rooms I’ve been in,” she said on SEN.

Hot weather is again forecast in Perth this weekend, with predictions of 36 degrees set for Saturday’s game, which will begin at 4.10pm local time.

Both teams will have access to more water carriers and longer breaks in an effort to combat the difficult effects of the heat.

The players’ association had also voiced its anger at the AFL’s decision to compress an “unreasonable” AFLW fixture, and that a further burden was faced by players who are recovering from recent bouts of Covid-19.

Bulldogs skipper Ellie Blackburn opened up on her recent return from the virus, with her first game a “horrible experience”.

“You can’t even do the warm-up without having to stop and try (to) take some deep breaths,” she told the W Podcast.

“It was a real battle, and that first game back was, to be honest, a horrible experience.

“I really, really struggled throughout that game. I just felt like my body gave out on me.

“It was just trying to get that one deep breath in … it felt like I couldn’t get that in throughout the game.

“And there were times where I just looked at the bench and thought, ‘Oh my God, that’s so far away’, like, ‘How am I actually going to make it to the bench?’

“So I hope nobody experiences that … the girls that can bounce back straight after it — I’m so jealous and completely in awe of what they’re able to do.

“It’s impressive if players can bounce back immediately from it.”

AFL’s player union has voiced its anger at the AFL’s decision to compress an “unreasonable” AFLW fixture as it canvasses Collingwood players about the oppressive conditions of their Perth trip.

The Herald Sun revealed on Tuesday that Collingwood women’s players and staff had to share a single toilet at a suburban ground on Sunday, while two members of the team were forced to stay inside change rooms for their entire match against West Coast in 34C.

It is understood the AFLPA has made contact with disgruntled Collingwood players to assess the fallout of a trip that took place under a strict travel bubble.

Richmond is expected to fly to Perth under the same conditions and play at the same ground this weekend in predicted 40C conditions, but the league is reviewing Collingwood’s issues.

The AFLPA’s player and stakeholder relations manager Brett Murphy told the Herald Sun the player union had repeatedly told the league that AFLW players on small salaries were being unfairly burdened given they were part-time professionals.

He said the league should have pushed back the home-and-away season to insert byes into the fixture to allow teams to catch up, with Brisbane facing a horror stretch of four games in 15 days including a trip to Perth.

The AFL on Tuesday acknowledged the challenges forced upon the league by a January start date instead of December because of Covid-19.

The league said it would attempt to ease the fixture crunch with a minimum of four or five-day breaks.

It can also be revealed that toilets were malfunctioning at Sandringham’s Trevor Barker Oval during the recent Lions-St Kilda AFLW clash, resulting in Brisbane players being directed to use three portable toilets that had been installed on site.

The state of the portable toilets in question has been described by one attendee as “disgusting”, with players not permitted to use a further six women’s toilets situated mere metres away because of Covid-19 protocols.

Collingwood star Chloe Molloy described the conditions at Mineral Resources Park on Sunday as below AFLW standard on Tuesday with the Pies “barriered off with one toilet” at the game.

Murphy said the AFLPA had been in constant contact with the AFL regarding the potential impacts of Covid-19 on the 2022 AFLW season as well as the 2022 men’s season.

“The AFL Players’ Association is disappointed with the AFL’s decision to compress the AFLW fixture, and to play multiple midweek matches, to make up for postponed matches,” Murphy said.

“In our view, the decision to compress the fixture imposes an unreasonable burden on players. “It is a burden which could have been avoided, or at least alleviated, by incorporating a bye or additional week into the schedule and playing postponed matches then.

“We have made these points to the AFL on numerous occasions.

“The burden felt by players is both physical and in their off-field lives at a time where many players are coming off illness caused by Covid-19.”

“We also thank the AFLPA for working with us on a financial compensation plan for players that have been impacted by having to play games midweek.

“After close consultation with all clubs and the AFLPA, the fixturing arrangements for rounds seven and eight will see midweek games scheduled with no team to have two four-day or five-day breaks in a row with interstate travel.”

Molloy told SEN on Tuesday the conditions forced upon the Pies players in Perth had been substandard.

“It was not luxurious at all and I think if you walked into what we were trying to prepare in for a game, you probably wouldn‘t view it as AFLW standard,” she said.

“When we got in there the changerooms had no lights so there was one light trying to light up a whole locker room.

“Coming into a dark changeroom, a change room that’s got one toilet that’s gotta be shared between male and female.”